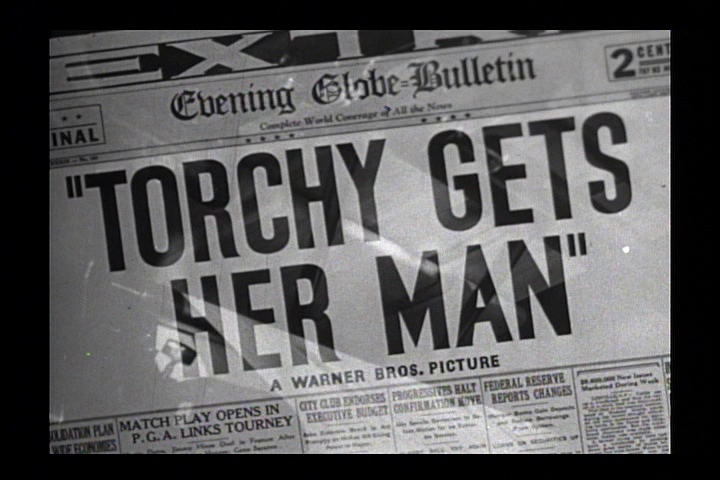 Glenda Farrell is back! Hooray! (Although I did like Lola Lane, the George Lazenby of Torchy Blanes.) Barton MacLane is back! Haroo! Gahagan never left. What does the sixth film in the land of Torchy hold in store for us? Well, honestly, not the best of the films. The mystery angles from the first four have been dropped. They seem to be sticking with a standard crime caper kind of thing like they did in Torchy Blane in Panama. I prefer the mysteries. But, then I didn't like the romance bits in A Night at the Opera and, apparently, audiences went for them. So, I may not know what I'm talking about. 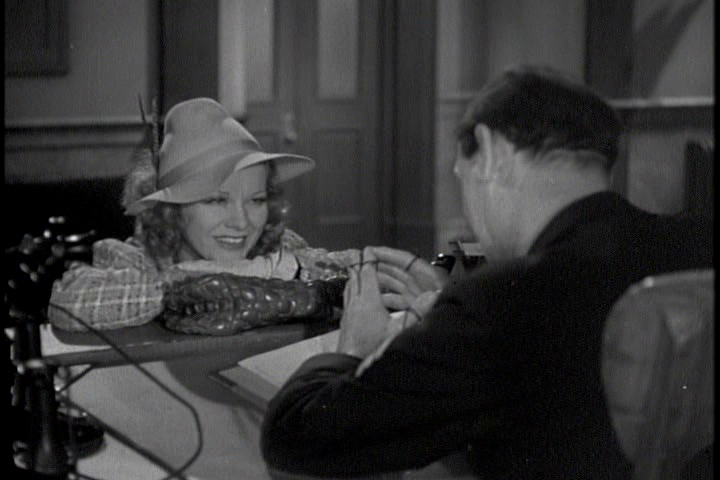 In Torchy Gets Her Man, the gang is on the trail of a counterfeiter with the nickname of "100 Dollar Bill." That's a great name. A Secret Service Agent named Mitchell shows up at the police station and enlists McBride's help. Shenanigans occur. They go to a big racetrack where the counterfeiters are in full swing. But, Torchy, with Gahagan and a German tracking dog, takes another route and finds out what is really going on. In the end, her and Gahagan are tied up in a country house with a bomb inside it! Can McBride save her in time? Should McBride need to save Torchy? Isn't part of the fun of these movies that Torchy doesn't need to be saved by all the guys? Well, she had to be saved in the previous film...  I guess that worked because it happens again here. 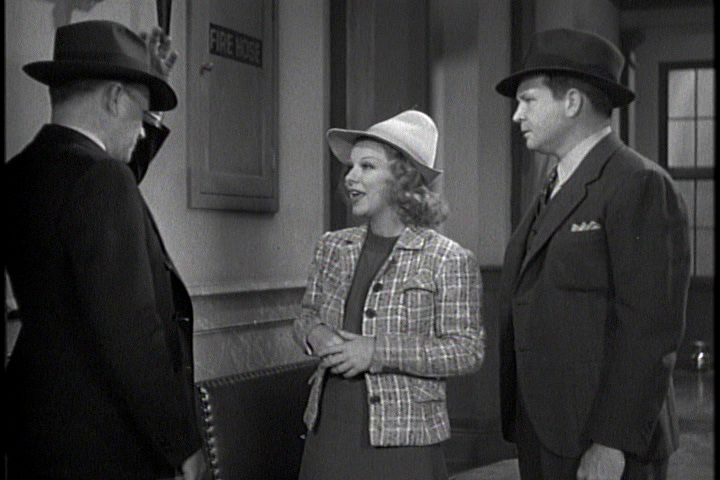 And she brought another one of those hats

I can't say that this film isn't entertaining. It's so great to see Glenda back. McBride is the same as ever. Gahagan is even goofier than usual. Luckily, this film has the great William Beaudine directing. He may have been denigrated back in the Golden Turkey days. But, anyone with an eye for entertaining movies can't help but enjoy his stuff. I've watched over 25 of Beaudine's films in the past year. And I've enjoyed all of them. This one is no different. In theory. 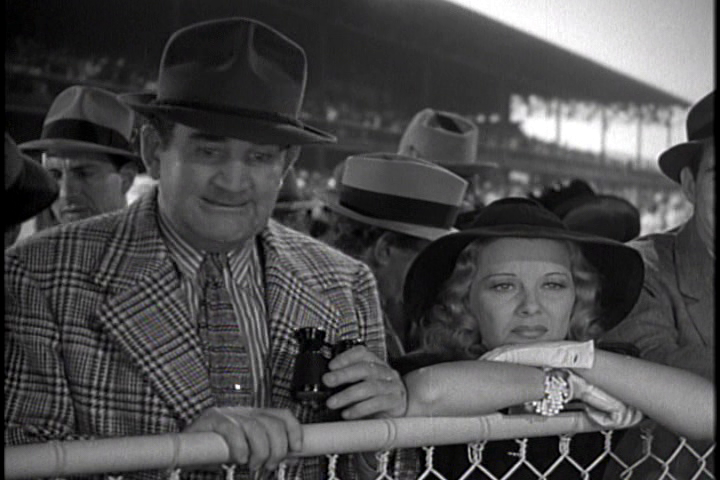 Headin' to the track!

There's something odd about this film. Back in Blondes at Work, I had expressed concern about the way the movie treated Torchy. She had seemed like such a strong, cool character in the early films. But, she was kind of punished for that. This film is even weirder. Torchy discovers what's happening. There's no murder mystery to solve but there's a double cross. And she has that dog and she had Gahagan. But, the big climax is her and Gahagan tied up, bomb ticking and struggling, while McBride rushes to the rescue. I know this was 1938 but it's not 1914. This isn't The Perils of Pauline. And, anyway, Pearl White used to do some amazing stunts. Glenda seems to be, kind of , working through the movie using a pre-approved set of "Torchy" mannerisms. Something has been lost. 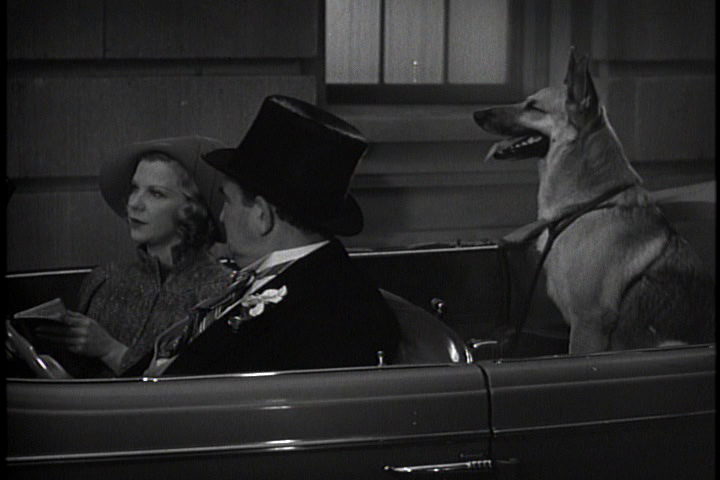 I'd watch this road movie

I was hoping that the build-up of the first four films wouldn't be wrecked by the Lola Lane adventure. It hasn't quite...  But, this film doesn't have the same feel to it that the first four did. It's a bit more rote, a bit more average. It's fun to watch and it's never slow. But, it's never wonderful. And tying Torchy up seems wrong. At least, Torchy in the previous film got to sass while she was captured, waiting for McBride. Here, she can't and it's semi-disconcerting. I hate to read into it but.. Glenda left Warner Brothers. They wanted her to continue as Torchy. She said no. They tried someone else and it didn't work. Then, they got Glenda back. And if there's one thing people in charge (studio execs in particular) hate is having to beg. So, they made Torchy submissive throughout the climax here. And it doesn't suit her. 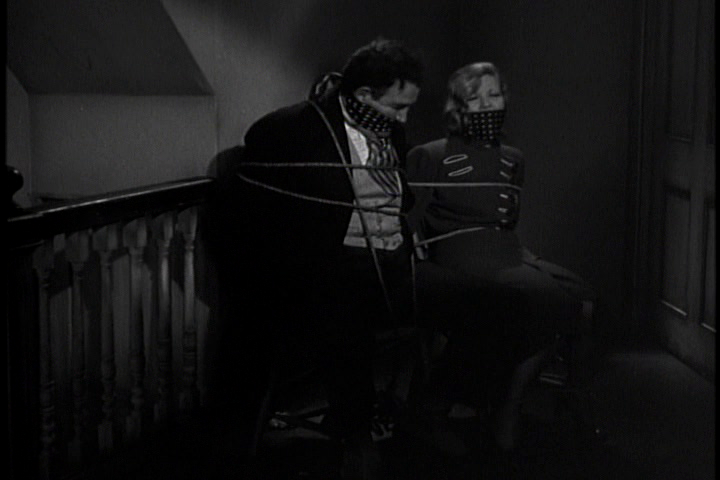 The Perils of Gahagan?

Torchy Gets Her Man is better than Blondes At Work. But, not better than any of the others. It starts off strong. The feeling I get at the beginning is sort of like when a TV show goes a way for a while and then comes back with the same folks in it and you hope that it will be the same as it was but it's not quite. Something's wrong. You can't quite put your finger on it but it's not really the same. (Futurama, Community and Absolutely Fabulous are three examples.) While it's good to have everyone back, I hope that the next film won't go further in this direction. 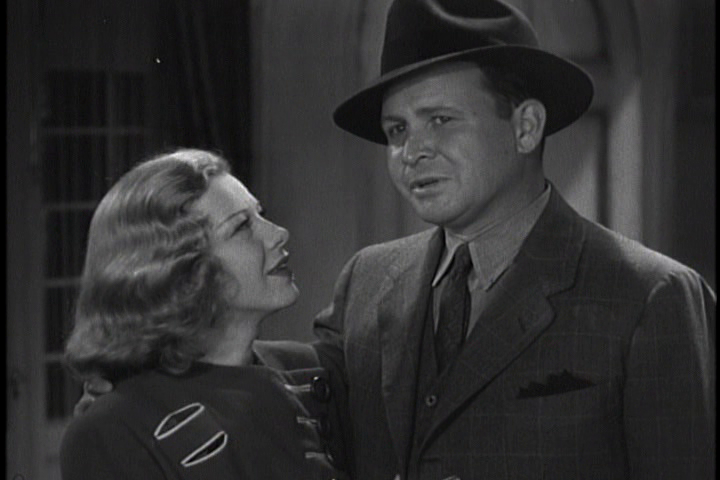 Should we have come back?

Return to the mysteries, please. Beaudine is good at them. Return to the charming repartee between Torchy and McBride. But, don't continue to denigrate Torchy and don't let the narratives become so standard. Number Seven is on the horizon. We'll see what's they have up their sleeve and what Torchy will wear on her head. 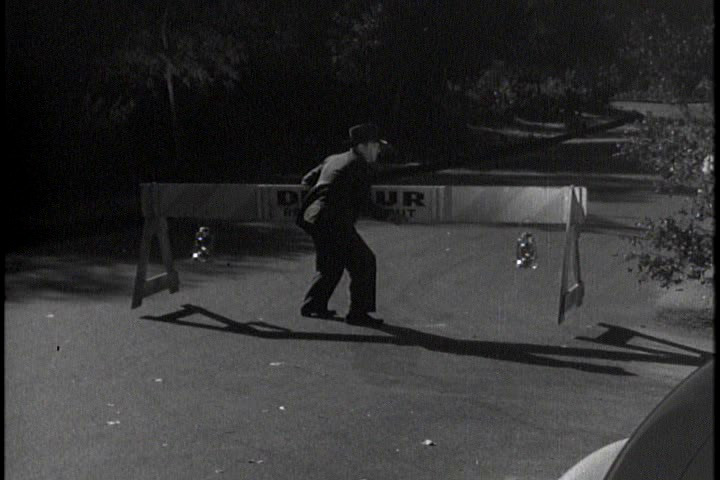