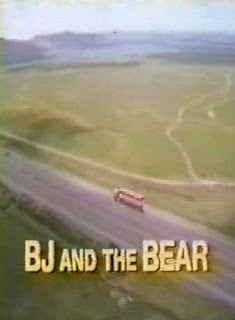 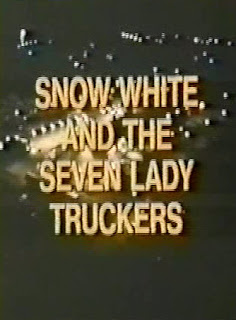 (Note: Yes, it's happening again. All my screenshots have weird shapes. Sorry. Stretch them in your mind.)

B.J. McKay and his best friend Bear return triumphantly for a full 21-episode season. Not only is the show a hit and a mini-pop culture phenomenon (Battle of the Network Stars, anyone?) but it spawned a spin-off: The Misadventures of the Sheriff Lobo. B.J. is back with a new nemesis, more beautiful women, new trucking routes and all sorts of adventures for (more or less) the whole family. The show is at the height of its on-air popularity. It's time to head on over to Country Comfort and meet the new gang. 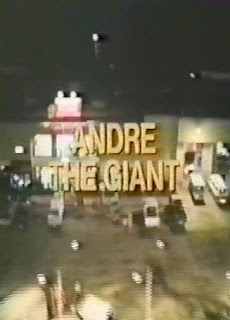 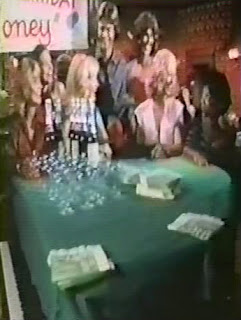 This episode is a rather (over?) elaborate set-up for a whole new world for B.J. and Bear. With Lobo gone, the producers needed to introduce a new sheriff quickly. They do. And, for some reason, they felt like the action/ T&A version of Route 66 (or Movin' On) needed a steady base of operations. Hence, Country Comfort... 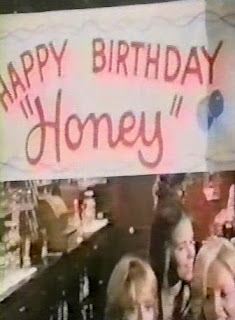 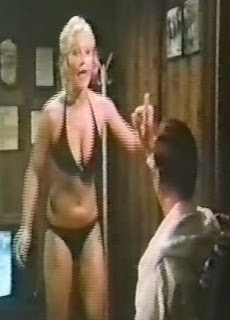 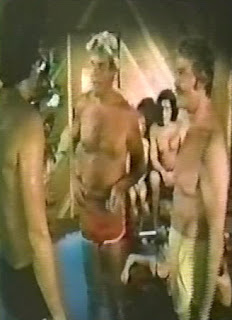 I don't believe it's ever stated where Country Comfort is located but it's along a truck route. I had always imagined it's in Southern California but that's surely not a central location in the United States if you travel all over the country. The one thing that gives me an idea of the location is from the Christmas episode. In the climax, it starts to snow. But, B.J. can make it to Country Comfort the same night in time for the Christmas shindig. Regardless, Country Comfort is a huge truck stop with gas, food and hot tubs. It's large enough to hold a wedding in. It's run by a man named Bullets. His bouncer is played by Andre the Giant. And, the truckers love hanging out there.


Hanging and Fighting at Country Comfort﻿ 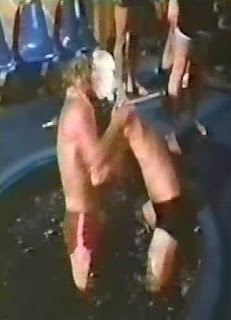 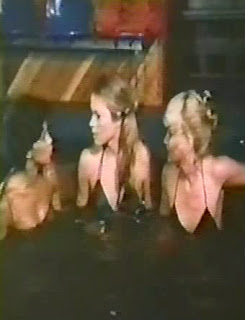 At the start of the episode, they are celebrating Honey's birthday. She is one of the "7 Truckers" of the title. Honey (played by Angela Aames) is differentiated from the others in that she has the largest breasts and the lowest I.Q. That's a little unfortunate. B.J. is there surrounded by Snow White and her gals. Plus Bear. I'm not sure if a lot of time has passed since the "Lobo" episode closed out Season One. But, B.J. seems very at home here. All the women clearly love him. Who can blame them? They also love Bear. Country Comfort is their home.


The ladies getting some trouble﻿ 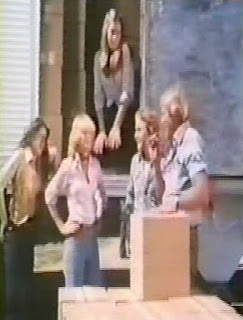 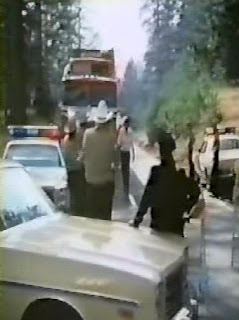 Unfortunately, there are a group of male truckers who don't cotton to female truckers. Hammer (played by Charles Napier) and his gang of manly truckers have joined together to be able to charge more to merchants. The women charge less. So, throughout the episode, these jerky guys keep sabotaging the women's jobs and getting in B.J.'s way. Hammer is helped in his dastardly deeds by...  yes, a corrupt police office by the name of Sgt. Beauregard Wiley, played by Slim Pickens. 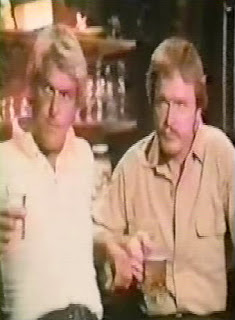 Hammer & That Guy with the Mustache﻿

Wiley basically works the local police station as if it were his own personal cash register. He cheats merchants with Hammer and the truckers. He keeps money from fines and bail money. He's a jerk, just like Lobo but with a stronger Southern accent. The Sheriff (played by Richard Deacon) is gloriously oblivious, far more interested in golf or eating lunch with the Mayor. The only hitch in Wiley's plan is a new "assistant," Wilhelmina Johnson, also knows as "The Fox" (played by Conchata Ferrell). She is there, ostensibly, to watch over his misdeeds. But, she turns out to be as much of a shyster as he is. So, they begin a shaky run of misdeeds together. And, of course, B.J. shall run afoul of them.


Wiley and The Fox!﻿ 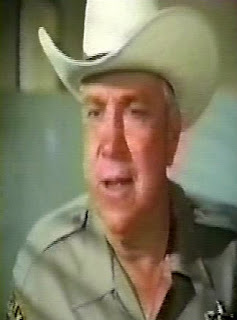 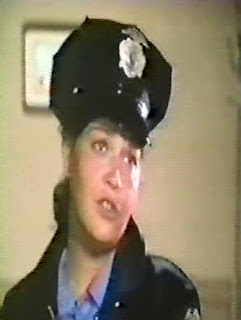 The episode is a series of scenes involving B.J. with the ladies trying to deliver stuff, the Sheriff and Hammer's group causing trouble, people in hot tubs and Bear, usually spazzing or being drunk. The climax of the episode is an extended fight in the rain and mud within a circle of trucks. The fight is between Hammer and B.J. over the trucking rights - men or women!


Hanging out at the station﻿ 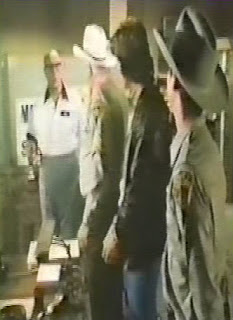 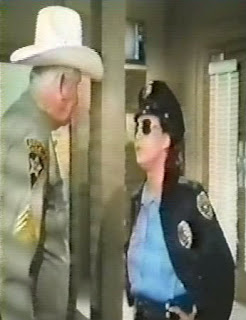 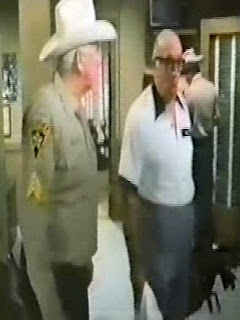 Show White (played by Laurette Spang) and B.J. have a romance developing throughout. She's a take charge kind of gal who leads her seven truckers into the fold to fight against the chauvinism and the jerks. (Yes, it seems like only B.J. can save them in the end...  I have no response to that apart from "It's his show.") Show White is at the center of one of the best moments of the episode. We learn what the real meaning behind her nickname is...  it's not what you think. 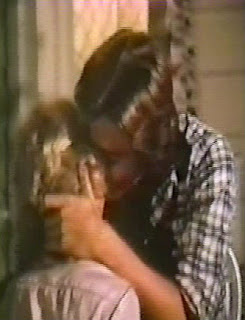 The 7 lady truckers are less developed (character-wise). There's Janet Julian as Tommy. She had been one of the hillbilly gals in Season One's "Shine On". There's Maria from Sesame Street. Always nice to see her. Honey is played by the secretary in the "Never Give A Trucker An Even Break" episode. And that's all I can remember. I'm certain there were at least four more of them, though. Andre the Giant? Does he count? Hey, it was September 1979. What didn't this show have? Hulk Smash! Exactly. 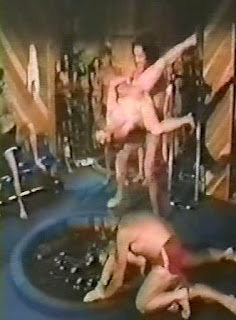 Critically, there's not much to say about this episode. It seems to be setting up an actual regular show for B.J. and Bear with a central location and a supporting cast. There are so many new elements that it's almost like the "Spearhead From Space" serial from Doctor Who. Only the Brigadier and the TARDIS assure the viewer that this is still Doctor Who. In this episode of B.J. and the Bear, only B.J., Bear and the big red rig remind us that this is that show we were watching the week before. In fact, it almost feels like a backdoor pilot for a truck stop show. 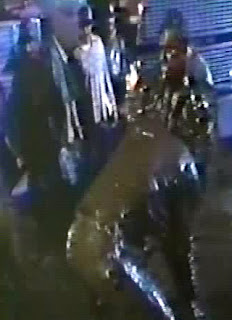 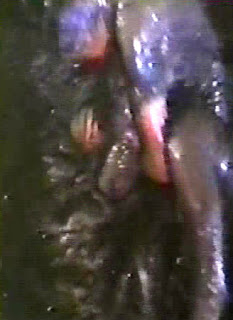 Did anyone say Mud Fight?﻿

Is it a good episode? All the constant set-up and the surfeit of new characters make it a bit of a tough one for me. I find it a trifle exhausting and I have a bit of trouble keeping up with everybody, especially when the government agents get involved. There's simply not enough B.J. and his best friend Bear in this episode. But, technically, it has everything that a fan would want. So, that can't be denied. The most interesting thing in the end is that [SPOILER!] B.J. beats Hammer in the brawl and Hammer vows never to bother the ladies again. The episode ends on a freeze frame with everyone surrounding muddy B.J. in the rain. 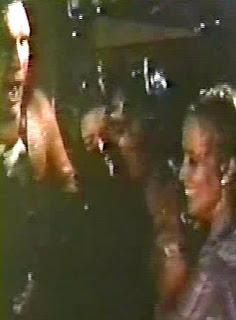 Freeze Frame
There is a muddy B.J. in there somewhere.
﻿
That's not how a B.J. and the Bear episode ends. Where's the wrap-up scene? Where is the freeze frame of Bear doing something wacky? Are they really setting this up as a Country Comfort-based show? Will Andre the giant play a larger part? Will the lady truckers all get names? Tune in next week to find out.
Posted by Daniel B? at 8:21 AM No comments: