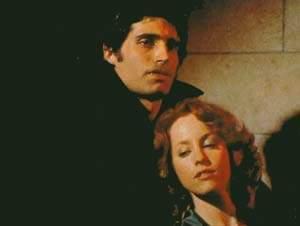 Can you believe it? This must be what bliss feels like.

With links to iTunes, Stitcher and Soundcloud.

Give yourself a better Sunday. Make it a brighter week. Listen to Eventually Supertrain.

The Misadventures of Sheriff Lobo S1 E6: Run For The Money Part 2

Originally aired on November 6, 1979
Directed by Bruce Bilson
Written by Everybody (See entry for Part 1) 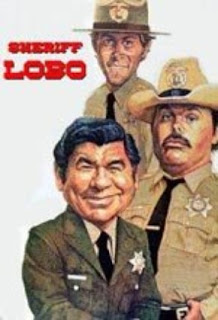 Note: Again, my copy of this episode is a wavy, washed-out mess. Unfortunately, I could not find this episode online. I promise you that Part Three looks better and will have screenshots. I decided not to litter this review with images that you won't be able to make out without very descriptive captions. Instead, Pictures of Lobo and the Gang!

The giant crossover continues with the first episode of The Misadventures of Sheriff Lobo that I've watched since around 1981. Now, because the same batch of people wrote and directed this episode and Part 1, there's no real distinction between Part 1 and Part 2. This doesn't feel any different than the B.J. and the Bear episode it's linked to. The whole thing is one giant free-for-all in and around the casinos of Las Vegas. We still have Lobo and his contingent, Wiley & The Fox, Cain and his sidekick, plus B.J. McKay and his best friend Bear. Along for the ride is Deborah Shelton as an F.B.I. agent. Plus, Glen Campbell! 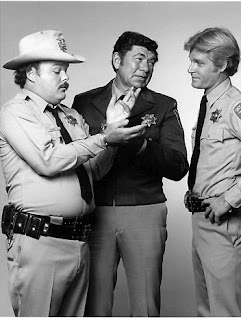 B.J. gets arrested for supposedly pulling the big heist in the casino involving nerve gas and casino ladies and a jerk. (Again, see Part 1.) He is let out on bail by Glen Campbell. (Yeah, I know.) He immediately begins tracking down the hitchhiker/ dealer from Part 1.

Lobo completely believes that B.J. did it. So, he and Perkins spend the episode following B.J. around.

Wiley saw the crooks stash the money in a suitcase in the Unclaimed Luggage room, which is locked. He wants to return the money and get a big reward. But, The Fox says "Let's just take all the money." So, they spend the episode trying to get into the room.

Cain does the smartest thing and studies the surveillance footage. That means that by the midway point in the episode he knows the two women were involved. (Although, the episode reveals this and then forgets it until the end. Hey, nobody's perfect.) 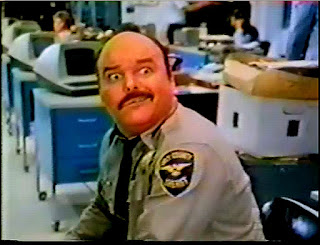 Because there are so many different threads roaming at once, things never slow down. Which is good because apart from the theft at the start and the twist at the end...  it is all about delaying the next portion of the story. All the running around and chicanery doesn't really come to all that much. But, that's OK. The point of the episode is not an airtight plot about a heist. It's about all these wacky characters getting out there and doing their thing. 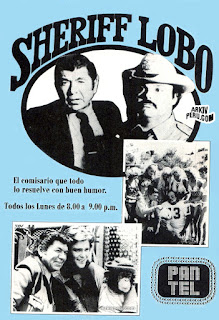 Does that thing involve Perkins winning a giant Wile E. Coyote stuffed animal? Yes. Does he have trouble getting into taxis with it? Yes...  Is there a shootout in the desert where said stuffed animal becomes involved? You got it. Mills Watson gives it his all, again. And, it isn't the funniest stuff around, again. However, this is a Lobo episode so they can goof on their home turf as much as they want. 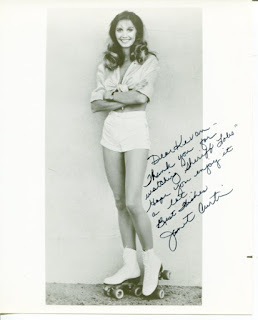 Run For The Money Part 2 shows off a very confident show. Willing to throw in a ton of characters and willing to risk (occasionally) almost losing the plot. For example, one of the thief women (the hang glider, not the hitchhiker) switches the money from one bag to another late in the episode. Doing that causes the end of the episode, with a big close-up on Wiley's face and a "TO BE CONTINUED" as he discovers that the bag that once contained the money now contains towels. But, for the life of me, I couldn't remember why she moved the money around, especially when you see the next part. But, regardless, this isn't at an A Man Called Smart-level of 3-part television but it is a lot of fun. What joys and pleasures and desert roads will Part 3 bring? Only the next episode of Lobo will tell us that. 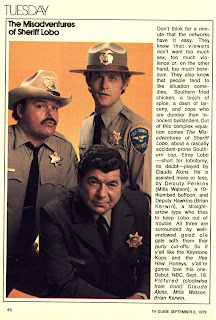 Hooray! Head on over to Christmas TV History (The Great & Awesome Joanna Wilson's blog) and read my Christmas in July 2016 column.

And have a good time.

Originally aired on November 3, 1979
Directed by Bruce Bilson
Teleplay by Michael Sloan and Sidney Ellis
Story by Glen A. Larson and Sidney Ellis and Robert McCullough and Frank Lupo and John Peyser

No one has a copy of Run For The Money (Part 1) that looks good. My copy is blotchy and washed out. So, instead of including awful screenshots. I thought I would give you a link to the episode on YouTube. Yes, it looks as bad as my copy but this is a fun, fun episode. Watch it and enjoy.

Run For The Money - 1st Section

This episode begins in Orly County. Sheriff Lobo announces to Deputies Perkins and Hawkins that they are going to a big Police Office Convention in Las Vegas! Woo hoo! And yes, Wiley and the Fox will be there...  and Captain Cain will be there. It's a meeting of all the cops who have given grief to B.J. and the Bear over the first 14 episodes of the show (and the TV movie).

B.J. will, of course, be there. He's hauling a whole batch of new police equipment to the convention, including a nerve gas of some kind. And yes, there is a beautiful woman whose car has broken down. B.J. gives her a lift. As he chats her up, a friend of hers hang glides onto B.J.'s truck and steals the nerve gas canisters...

At the convention, B.J. is accused of stealing the canisters. All the cops who dislike him believe he did it. In the end, the two women, in cahoots with some guy, hook up a gas canister to the ventilation system of the casino...  their intention: to knock everybody out and rob the place! The episode ends with a "TO BE CONTINUED" as B.J. is incapacitated by the gas and the ladies release the noxious fumes into the cop-filled gambling den...

Run For The Money - 2nd Section

Here it is, folks. The big one. The one you've all been waiting for. The epic-3 part BJ and the Bear/ The Misadventures of Sheriff Lobo crossover. The most epic event of November 1979. Where were you on those three big nights? Your answer should be: In front of my TV watching "Run For The Money."

Because this one gives you everything (well, almost everything). Lots of comic cops. BJ and Bear in trouble but staying cool. Lots and lots of Perkins' Pratfalls. An almost over-complicated plot. Beautiful women. Hang gliding, for Heaven's Sake! Look at that writer credit! 6 people wrote this! 6! You know that's got to be a good sign. They're going for broke!

Run For The Money - 3rd Section

I do wonder if the ratings for the two shows had started falling yet. That would explain this epic crossover. Trying to boost those darn ratings. At the same time, this could have been the absolute height for these shows and Glen and friends were simply trying to capitalize on America's love for these shows. Regardless, we got it. And it's epic-ish.

The episode feels more like an episode of Lobo than an episode of BJ. Lobo is in the pre-credits sequence. BJ sort of vanishes about a third of the way in as the sheriffs and their friends take over. Perkins gets more screen time than BJ. I like Perkins. One of the Joys of Perkins is that his slapstick is never very good. But, it's charming. Slapstick isn't just someone falling around on screen. The camera has to be in the right spot. Things must be precise. But, Perkins just falls all over the place and the camera isn't always in the right spot. Although I don't laugh, I appreciate.

Run For The Money - 4th Section

This episode is a lot of fun. It's a hog pile free-for-all with all the characters that we love. It's too bad that BJ is shunted off to one side. But, I do like the way he comes back in at the end. There is a fun scene with Wiley/ B.J. and the two thieving ladies on stairs near the end. And Bear eats a pastry. And Wiley gets yelled at. Then, suddenly... the cliffhanger appears. Nicely done.

Amongst all the shenanigans, there is this slowly building story of the two women at the casino and this one jerk guy who are planning the heist. The episode moves at a decent pace. It doesn't go anywhere fast but it seems to be enjoying where it is at any given time. There is the occasional odd moment where it seems to be getting a bit out of hand...  especially with relation to the opening credits. Specifically, the regular title card reads "B.J. and the Bear" as the rig tools along...  then the next title card simply reads "Lobo". Greg Evigan is credited in the usual spot at the start. But then, he's given a "Guest Star" credit later on within the same opening credits. What? Well...  I guess that means it truly is an epic.

Run For The Money (Part 1) is mostly set-up but it is 100% set-up for everything that we love about this show and Lobo. I find nothing wrong with that. It makes me very happy. I just wish someone had a nicer quality copy of the darn thing. 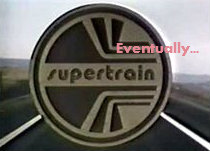 The second episode of my new podcast...  Eventually Supertrain...  is available for listening.

NOTE: I am still wrestling with getting the feed on iTunes. If you would like an mp3 file of this episode, please email me at esupertrain@yahoo.com
Posted by Daniel B? at 12:48 PM No comments:

BJ & THE BEAR-RUN FOR THE MONEY PART FOUR

BJ & THE BEAR-RUN FOR THE MONEY PART THREE

BJ & THE BEAR-RUN FOR THE MONEY PART TWO

BJ & THE BEAR-RUN FOR THE MONEY PART ONE

Follow the link below to the Eventually Supertrain blog...  and you can listen to Episode 1 of my brand-new podcast! If you like TV shows that got cancelled before their prime, this is the place to go. It's a great time. I guarantee it.