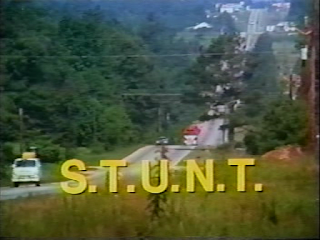 BJ, Stacks, Callie and Bear are hauling a bunch of equipment to a movie studio. The studio is shooting something called "Nightmare," which is a horror thing with lots of stunts. While there, BJ meets up with Steven Thomas Ulysses Nathaniel Travis, AKA STUNT. His team of stuntmen are doing all the gags for this show. One of the stuntmen is Jake O'Brien (Buster Crabbe), an old time stunt guy who seems to be taking one too many risks. His daughter, Tess, is the star of the show. But, someone seems to be sabotaging the production. And there seem to be some mob guys there. And there's a huge stunt that BJ may end up doing instead of Jake. And, well, lots of things. 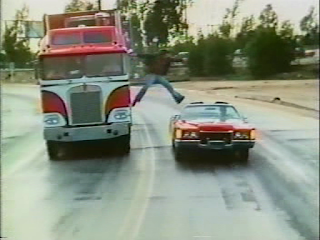 Best stunt in the episode
Oddly enough, they never ask BJ to do anymore.
(Although, he does. But, that's BJ for ya.)

Let's get the not-so-great stuff out of the way. The episode opens with the gang on the way to the studio. They see an out of control car with a woman screaming for help. BJ leaps from the rig into the convertible and saves the day. But, there's a helicopter overhead with a camera and a cameraman in the car! BJ, what have you done? Now we've seen this sort of stuff before. The hero wandering onto a film/ TV set not realizing what's going on. But this one is really dumb. 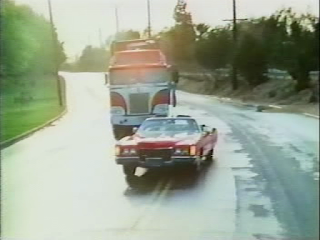 Tip to filmmakers: Block off the flippin' road, you ding dongs.

There's that helicopter above their heads for one. There's the fact that the cameras aren't really well hidden. Plus, why isn't the road closed off? If it is, how did BJ get on it? If it's not closed off, then maybe they shouldn't be so angry when a heroic trucker tries to save the day? Maybe the way it was written made more sense. Maybe a roadblock fell over or BJ got lost or something...  But, as it stands, this ends up making everyone look stupid, especially when you see how mad the film people get. This is not how you do stuff like this. Having said that, the rest of this episode is one of the best of this season. 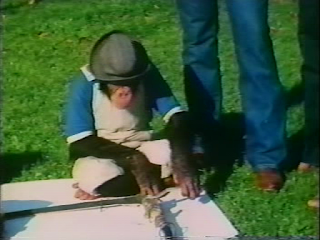 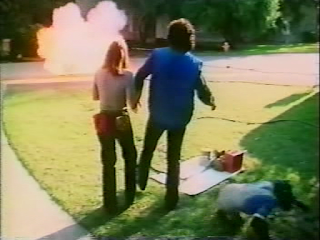 Bear causes some trouble with the fire and the flame and the Oh Lady!!

It helps by leaving Grant out of it and just featuring two of the gals. Callie is still annoying (and actually doesn't do much). But, Stacks is turning out to be the most interesting new character. Yes, she's a bit dim. But, she's sweet, considerate, very loyal and has a nice streak of curiosity in her makeup. I could watch BJ, Stacks and the Bear for a couple of seasons and always enjoy it. 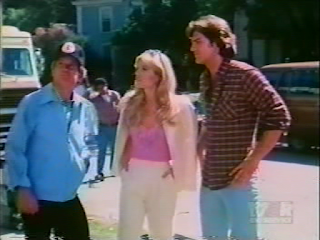 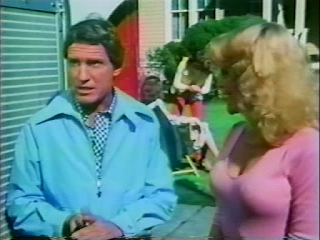 There's Stunt and Tess...  and Stacks!

The other element that really helps is that this one feels like a Season One episode. BJ and the gang go somewhere. Make some friends. Get involved in chicanery and save the day. It really hearkens back to the time when the show was going great guns. There should be more episodes like this. Is it Michael Sloane who brings this out in the show? I'm not sure. But this is a more engaging episode than many of the others this season. 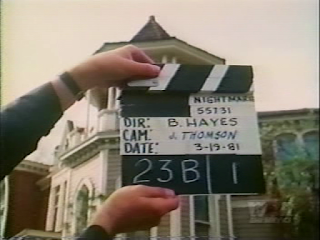 The plotting itself is good and a bit over-complicated. (In a good way, though.) It seems like a simple "Someone is sabotaging the production" kind of story. There's a lot more going on here, including the O'Brien plot line with some mob-like guys. There's some nice misdirection as to who might be sabotaging the show. And then, just when it seems like things might be slowing down, there's a huge bar-fight that, almost, comes out of nowhere. Hey, in an episode ostensibly about stunt people, why not assemble a ton of them in a bar and have them throw each other around for a while? 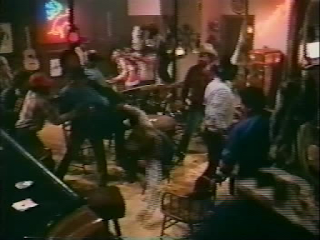 If you're going to fill your bar with stuntmen,
have them fight.

The pace of the episode is nicely done. It sets up the final big stunt early on. First by showing of some fire gags related to it. Then, we see the schematic for it and the actual set-up. Then, BJ and Stunt do the stunt. It's pretty impressive. And it's one of those big story moments where it happens and then, hooray!, everything's all right. It doesn't actually quite wrap up the episode completely but it's exciting enough to bring things to a close. 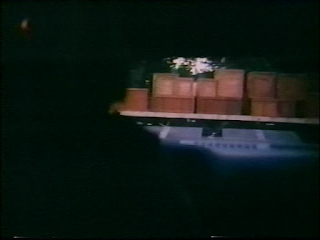 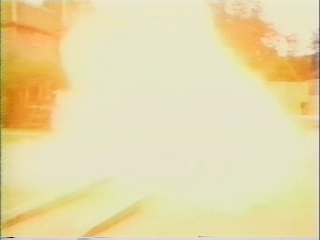 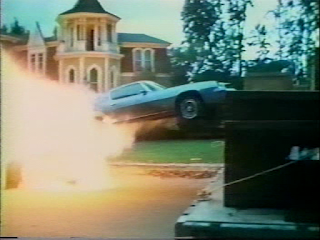 There's all kind of stunts going on in here

The character of Tess brings up the continuing problem with the new format of the show. Stacks is constantly flirting with BJ and he's flirting back. But, the producers really don't want him getting involved with his employees so we get Tess. The "Woman BJ falls for and vice versa this week." Back in the day, there was a love 'em and then leave attitude that befit the character's travels and wanderings. But, he's settled now and she lives in Los Angeles where he is. Why can't they see each other more? He's not vanishing halfway across the country. He'll be near her. So what's the problem with the relationship continuing? The two formats clash here and they end up not making much sense alongside one another. As I've mentioned before, it feels like someone didn't think something through. 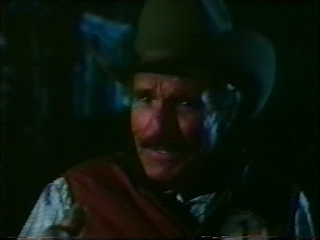 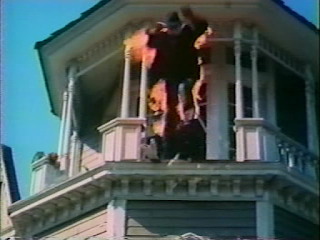 This isn't Hooper or Stunt Rock. But, it is a very good episode of the show very late in its run. Although, yes, why they're making something horror-related instead of an action film is slightly confusing. But, it is early 1981, and we are all horror crazy at the time. Anyway, watch this one. You'll be glad you did. 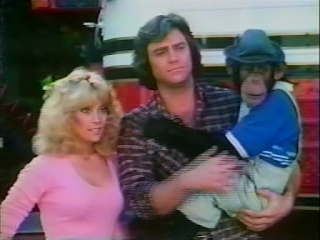 I'd watch the heck out of this show.
(I guess I kind of am.)