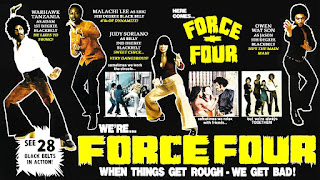 Episode #2 is here. Follow this link to all the other links that will let you listen... 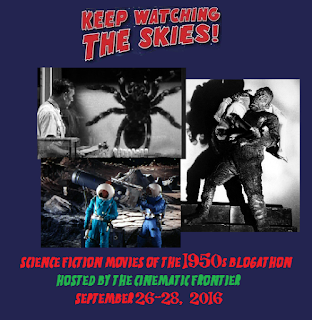 This post is part of the KEEP WATCHING THE SKIES! blogathon, hosted by The Cinematic Frontier. Head on over there and check out the other entries. 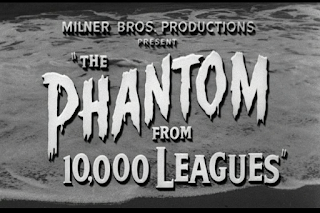 A chicken-esque lizard monster (referred to as The Phantom) guards a shaft of radioactive light off of the coast of Southern California. Prof. King from the local Oceanography school may have something to do with it. His daughter, Lois, is falling for the visiting Dr. Ted Stevens. Ted is there to see Prof. King who waffles around about science a lot and conducts odd experiments in a locked off laboratory. Both Prof. King's assistant, George, and his secretary, Mildred, want to get inside the lab. William Grant is a government agent who initially distrusts Ted but then begins to work with him. Several people are killed as they approach that shaft of light and are attacked by the Phantom. George is working for Wanda, a femme fatale representing a foreign power. Ted starts to fall for Lois. A janitor at the Institute talks about God a lot. Prof. King keeps calling Ted a "young man" even though they're the same age. George utilizes a spear gun wall in Prof. King's office to help him shoot a lot of spears at people. Eventually, things culminate in the destruction of a naval ship by the shaft of light. And it's up to Ted, Lois, Bill Grant, Prof. King, maybe Wanda or George, possibly Ethel but probably the janitor to try and save us all from The Phantom From 10,000 Leagues. 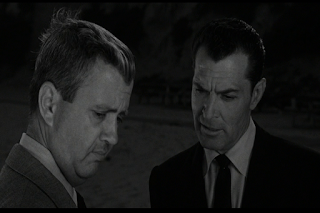 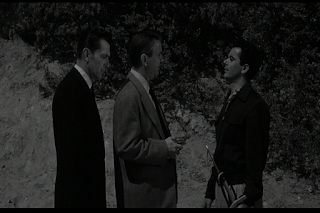 Oh look, it's George. With a spear gun, of course﻿

Now, forget about that last paragraph. The Phantom From 10,000 Leagues piles on the plot-lines and the intrigue and the characters. But, it never builds to anything. It meanders from scene to scene. It remains slightly vague about what exactly is going on out in the water, even though folks spend many minutes talking about it. The director and editor choose to shoot almost every dialogue scene with people entering the scene, standing in place and then delivering their dialogue. There are long pauses that would have baffled Pinter and Bergman. There are reflective moments at the ends of scenes where it's tough to figure out what is being reflected upon. And, even though there must be a lot of people living around this beach area, all activity revolves around the same seven (or so) people. Richard Harland-Smith says in his Blu-Ray commentary that someone once remarked no one had ever made it all the way through the movie. 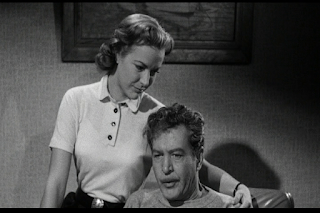 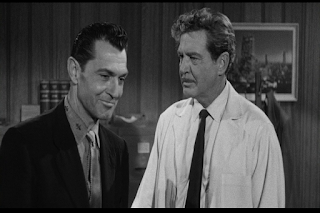 "Professor, I kissed you daughter."
"And I am going to punch you right on your handsome square jaw."﻿

I have. About eight times. I love it. 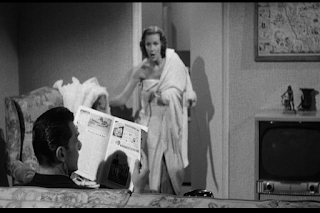 It's clearly boring as all get out. It never moves beyond a snail's pace. The gradual increase in fidelity from the old dark TV/ Public Domain DVD prints to the widescreen MGM DVD to the Kino Lorber Blu-Ray somehow make the film even more slow. Now, that we can see everything, we can see that there really isn't much of anything to see. The film also seems to contain variations of everything Dr. Paul Armstrong says in Larry Blamire's Lost Skeleton films. But, in Leagues, they are said with deadly seriousness. All the actors do a fine job, which makes the slow scenes and the circular structure of everything even more obvious. The Milner's (Marty not included) are trying to fill up 80 minutes for the bottom half of a double bill (topped with The Day The World Ended) and they do fill up 80 minutes. To top of all of this, the title is 100% nonsense. 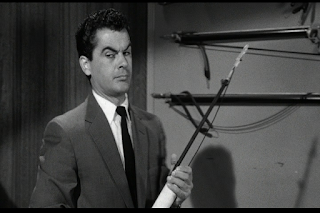 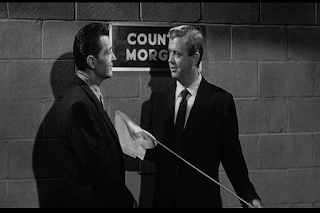 This is an improv routine that went nowhere﻿

Even after writing that paragraph browbeating the film... a paragraph that yells "How on Earth could you like this film?"... I continue to love this film. Mainly for these strange shortcomings. Mainly because of the sheer audacity of the whole musky exercise. And there are the words for it: Sheer Audacity. I have been mentioning those words as a genre of their own for several years: within some of my reviews on Bleeding Skull.com, over at my podcasts, in my two books. No one else has ever used that term but me. The Phantom From 10,000 Leagues is a great example of a Sheer Audacity motion picture. Let me define my terms.


Ladies on the beach
One nice, one evil (but seductive)﻿ 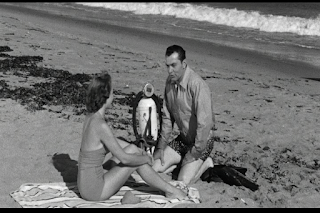 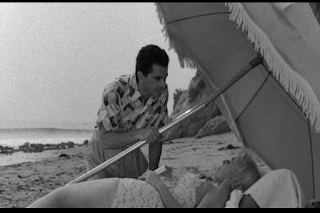 A Sheer Audacity movie can be from any genre, any time period. It can be good or it can be not-so-good. It can be a Classic. It can be a film you've never heard of. The one thing they share in common, and it doesn't matter how they get there, is the viewer is left shaking their head or staring at the screen in confusion by what they've just seen. The "sheer audacity" of the filmmakers overcomes the regular "entertainment" one gets from a film. Sometimes the filmmaker has a firm hand on this. Three films that come to mind are Persona, Brewster McCloud and Inland Empire. In the best possible ways, three brilliant filmmakers show us things that stymie our mind. That leave us shaking our heads and wanting to watch the film again. 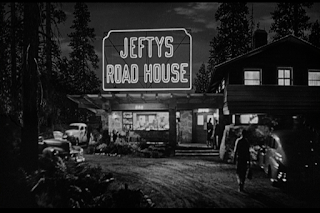 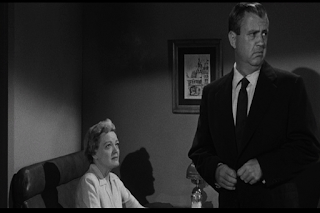 Mildred and Bill meet at Jefty's,
the most awkwardly named Road House on the West Coast﻿

But then, there is the other side of the genre. Films like Night of Horror, Devil Monster, Silent Night: Deadly Night 2 or The Phantom From 10,000 Leagues. These films aren't classics. They aren't particularly well-loved but they (and I could name ten more if needed) are so individual in their oddness, in the way they are structured, in the way they tell (or don't tell) their stories that those who have seen them (and don't dismiss them outright) remember them as being completely "different" experiences. 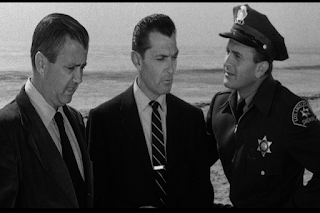 For example: Devil Monster is a high seas adventure where have of the running time is stock footage. Night of Horror tells a story that should take no more than 20 minutes and stretches it out to a half-hour by going off on 1,001 tangents including a very long road trip sequence and the recitation of E.A. Poe's poetry. Plus, it does nothing "technically" right. The Phantom From 10,000 Leagues could be a very interesting cautionary tale about science becoming irresponsible and going too far. But, it's not. 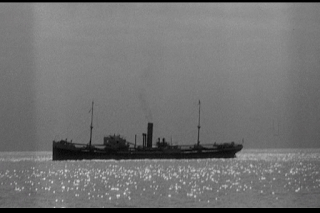 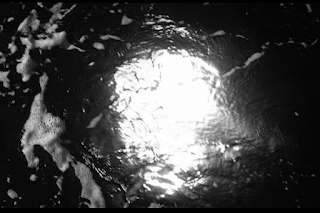 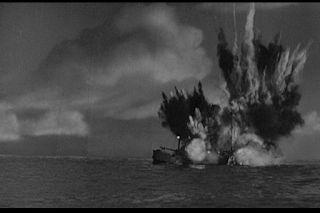 Here's where that radioactive light really begins to cause some trouble
﻿Who invented stock footage?

The film is a lot of people talking endlessly and, sometimes, hilariously. It has, as mentioned, an overabundance of subplots and intrigue. It's main monster may be dangerous but it's placed so far from shore that people have to actively approach it to be attacked. (It's not as silly as the machinations of a film like Humongous that spends ages getting its teens onto Dog Island so they can be attacked but it's fairly ludicrous.) Every character is a stereotype. No one wanders outside of their roles. Scenes seem to keep going around and around. Someone is killed. Investigations are made. They seem to relate to Dr. King. But not quite. Ted takes Lois out. George threatens someone (usually Mildred) with a spear gun. Another killing etc... 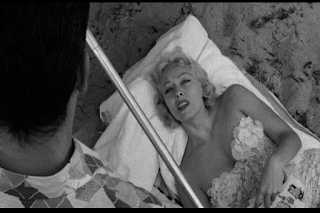 "You're sensuous! I got it.
Lose the Doily Bathing Suit."﻿

The Milner's other sci-fi extravaganza, From Hell It Came, is about as goofy as this one. It definitely has a nuttier monster. And it works on almost the same structural ground as Phantom. But, it's not as determined to go nowhere fast in the way that Phantom is. That's why I love Phantom. Competent actors, decent tech skills all hampered by a script (and possibly a director) who know they don't have enough going on to fit the run-time so they resort to every bit of calm chicanery they can to extend it. 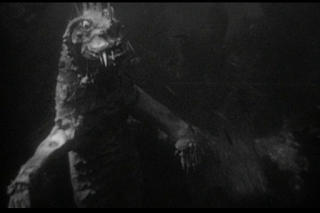 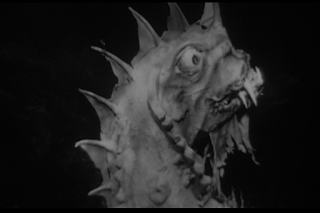 I saved the best for last. It's the Phantom.﻿

What looks like boredom is a wonderful, desperate attempt to make a feature length film. I cannot fault anyone for falling asleep during this movie or turning it off after 30 minutes. However, keep in mind, once a Sheer Audacity film is watched in full, the movie calluses on your brain are strengthened. The more you watch, the more you can watch. The Phantom From 10,000 Leagues is not a regular "good" film. It's simply a rather fascinating odd one that just happens to look like a regular film. That's enough for me want to watch it again. Give it a try. Wanda will wear her big doily bathing suit just for you. 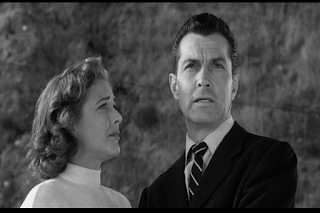 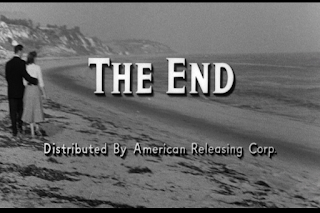 It's only The End if you don't start watching it again
Just hit 'Play'
Posted by Daniel B? at 8:23 AM 3 comments:

Quit clawing at the walls! Eventually Supertrain #7 is here! 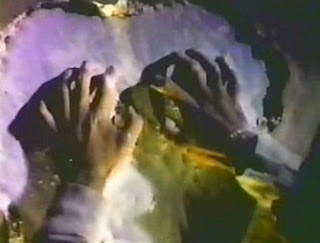 Season 2 of Joanie Loves Chachi continues...  with Cunninghams Galore!
Cliff Hangers! has another great, great episode.
Thrill to Cobra And The Mistaken Identity.

Subscribe! Leave a rating! It will make you feel warm inside.

An Interview With Stacks!

We're not at Season 3 of B.J. and the Bear yet. But... if you follow this link, you'll find a pretty great TV Guide interview with Judy Landers AKA Stacks!

Give it a read. 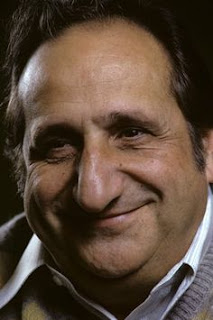 Season 2 of Joanie Loves Chachi begins!
Cobra continues...  being awesome!
Cliff Hangers! has entered the second half of its run. 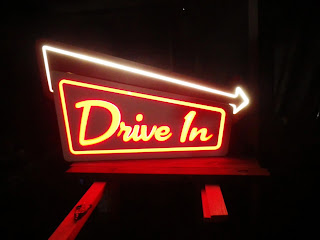 I have been working on a new podcast. It's called Dan's Drive-In Double Feature. The first episode is me discussing Blackenstein and Frankenstein '80. In between my discussion of the film, I play movie trailers and classic drive-in theater ads.

The point of the podcast is an excuse to discuss great exploitation/ genre films from the main drive-in years. Basically from the mid-1960s to the mid-1980s. Each episode covers two films. They can be from any genre. We start with horror because it's fun!

The first episode (call it The Pilot) is on the Eventually Supertrain feed. I decided to place it there so folks who were enjoying some of my other work could check it out and see what they think. I wanted to test the waters here before putting it in its own space.

So, please, listen and enjoy...