Episode 42 of Eventually Supertrain is here! 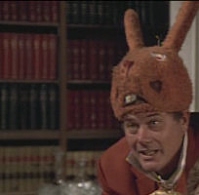 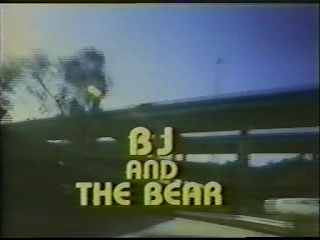 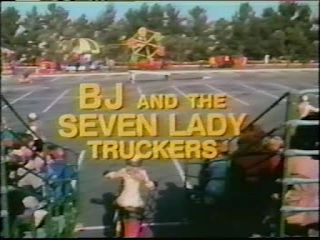 BJ is back! So is his best friend Bear. But, there's something else going on.

Remember the credits in the first two seasons? Lots of shots of the rig, B.J., Bear (a bit of Janet Julian) and traveling the highways and byways of America. And the important part: "Starring Greg Evigan." That was the sum total of the regular cast credits.

Go find a copy of the Season Three credits. When you've watched them, come on back.

All right. The first thing to notice is that the rig goes from highways and byways to Los Angeles very quickly. I live in Los Angeles. It gets pretty dull seeing LA as the starring location in a TV show. Yes, I know that most of BJ and the Bear is shot in and around LA. But, it's trying Not to be LA. The credits imply that things are going to be more LA-centric in this season. Second, and this is the big one...  "Starring Greg Evigan"...  and how many other people? Eight?! What the (pardon my French) hell? 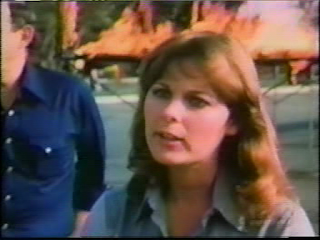 I'm one of the Seven Lady Truckers
Do I look like the annoying one?﻿

Season one had Lobo and his gang showing up several times but never enough for the opening credits. Season two had the Country Comfort gang but intermittently. These new credits are packed with people we've never seen before on the show. (And they're the same length as the old credits so everyone appears pretty fast, which is kind of amusing.) What is going on? Is this the same show that finished its last season about six months ago? 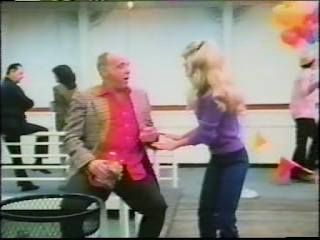 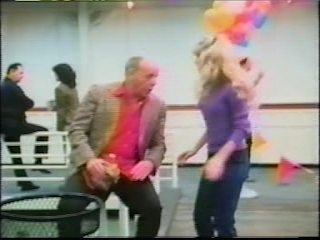 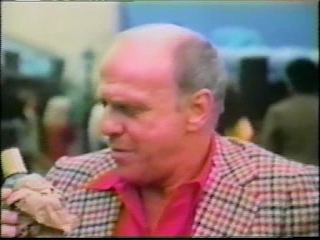 Guess what this drunk is going to do with his booze?
﻿

Well, it is and it isn't. Both this show and Lobo had passed their peak ratings-wise by time the summer hiatus hit. So, the network performed a "soft reboot" on both shows. I haven't seen Lobo but I know they moved him from Orly to Atlanta and gave him a sassy secretary, played by Nell Carter. I have no clue if this worked or not. (And, I don't mean just ratings-wise. It obviously didn't. I'm more interested in whether or not it improved the show.) For BJ, well...  let me give you some plot here and then I'll give you my thoughts on this new format. 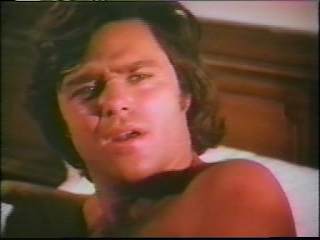 How long is this episode?

In the beginning, we learn that BJ and Bear have been working for a group of 7 daredevil carnival women. They travel the country from carnival to carnival doing their show. BJ hauls all their stuff around. We very quickly (I mean, very quickly) meet the 7 women. There's the annoying one, the one who likes gambling, Judy Landers as Stacks, the twins, the African American woman and the one I don't remember. Then, even quicker, some guy from a trucking company offers to buy BJ's rig. BJ says no. The guy steals the rig. BJ tries to stop him but he fails. They find the rig in a field and all the gals' equipment is gone. The cop who takes the statements implies that BJ had something to do with the theft. (The accusation comes out of nowhere and is completely unfounded. But, everyone seems to believe it.) The partnership between BJ and the gals ends acrimoniously. 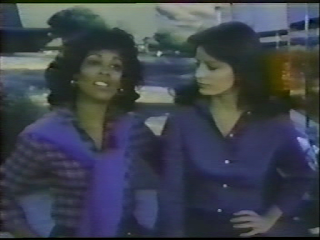 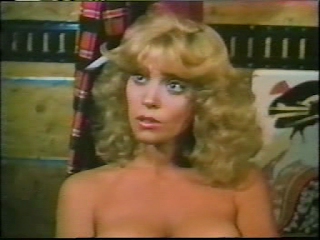 Definitely one of the Seven Lady Truckers

BJ is going to visit a friend who owns a trucking company in LA. The twins work for this guy. Along with another woman who may have been the seventh woman. I'm still confused. Very quickly, that same trucking company jerk shows up and runs down the friend. BJ agrees to look after the trucking company while his friend is laid up. They need to do a big haul for some company and BJ needs seven truckers...  Do you see where this is going? He recruits the ladies and they haul! 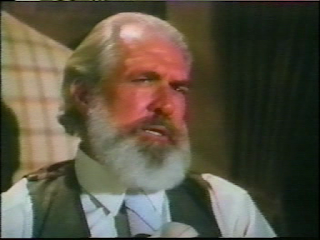 Am I one of the Seven Lady Truckers?﻿

Meanwhile, the new Lobo, Sgt. Rutherford Grant is in charge of some sort of task force (called SCAT) to do something or other related to crime. But, mainly, Grant's a crook. His second in command is the guy who semi-accused BJ earlier. BJ falls afoul of Grant and suddenly has a new nemesis. 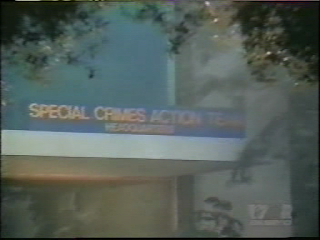 SCAT! The Program They All Laughed At! 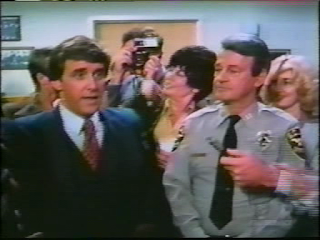 In the end, BJ agrees to run the trucking company with the seven ladies. And, one of the ladies declares that BJ has a family whether he wants one or not.*

And, Bear is in there somewhere.

There's a lot to unpack with this episode. But, unlike the show's TV movie 2-hour episode, which is fresh, fun and exciting, this one is all retread, especially of last season's opening 2-parter. Now, I know that one of the joys of this show is the familiarity of it. It ran out of new ideas about 8 episodes in but the Evigan Charm and the wanderlust spirit made it great. That isn't really evident here. The episode spends a very long time setting up this new premise, which, frankly, isn't that great. 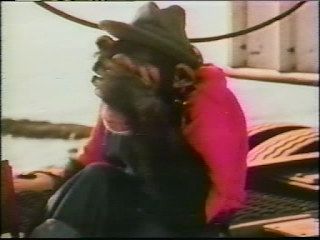 Bear is not so thrilled with this episode﻿

I hesitate to make this review a list of negatives but I see a lot of problems here:

1) The seven ladies are pretty bland. The annoying lady is aggressively annoying. Every time she opens her mouth, I rolled my eyes. Ms. Lander's is gorgeous but she's nothing but eye candy. The twins are (dare I say it) indistinguishable. And the other ones? Yeah, I just don't know. There isn't enough character among these seven characters for two characters. Let alone 3 or 4. My hope is that they will become more developed as the season goes along but I'm not holding my breath. 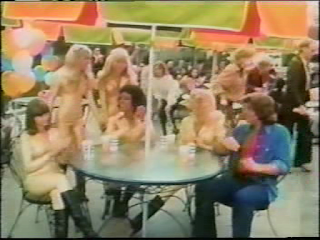 How come there are only five of us?
Is BJ one of the Seven Lady Truckers?﻿

2) A problem arises with these gals. One of the defining characteristics of the previous season is that BJ arrives somewhere and gets in an adventure with a woman that he has a bit of a romance with. (I've asked the question before: Is the show about a guy who gets in adventures that generally involve him hooking up with a lady? Or is the show about a trucker's romances that generally involve some kind of adventure?) It is implied that he will Not be having romances with these seven ladies. OK. That's fine. But, that erases a significant portion of what the show gets up to on a regular basis. So, they do something weird. When BJ's rig is stolen, BJ gives chase. But, not with one of the seven gals. He steals a car with a just married bride in it and goes after his rig. And, he flirts with the bride and she flirts with him. In a regular episode, this would be fine. But here, after we see him spending time with 7 attractive women, it reveals up a format issue: If we're not going to have him romance the seven ladies, how do we get the requisite episodic romance into the episodes? Well, you introduce More Women into into the show. Which means that the average episode will have 8 new female characters running around. That seems incredibly cumbersome. It's a major fault in the new premise. We'll see if it continues. 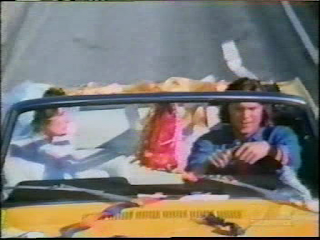 I don't think she's one of the Seven Lady Truckers﻿

3) Grant is pretty dull. He's Lobo without the Akins charm. He sure ain't Slim Pickens. He's a generic crooked LA cop who, it's promised, is going to be in Every Episode this season. I'm getting tired just thinking about it. 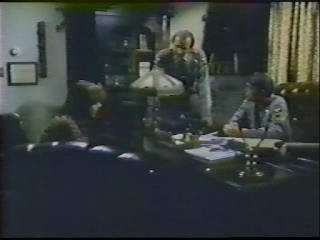 The trifecta for this season﻿

4) Who structured this thing? As I mentioned, it quickly introduces us to the seven women. So, quickly, that I didn't know who any of them were when the opening sequence ended. And that trucking jerk appears out of nowhere and so quickly. Do trucking companies really work like this? And that jump of several months isn't really signposted. It just kind of happens. The seven gals get on a bus. Then, BJ is in his rig listening to a female DJ. We learn that the DJ is one of the seven gals and that she's a very popular DJ. BJ wonders what they're up to...  and we realize that we've jumped ahead months, if not longer. The whole thing is very awkwardly put together. And... 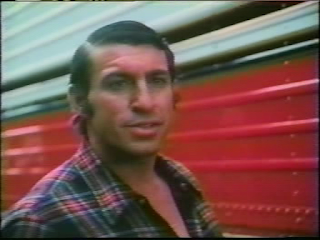 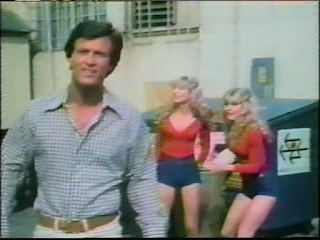 5) There are so many characters! Not just the main 9 (Main 9!). But, the other cop and the trucking company guy and BJ's friend and some lady who may be the seventh trucker but might not be and all the people that BJ works with to arrange the haul...  and Holy Crap! People just keep appearing and appearing. And, probably, about 60% of them are surplus to requirements. 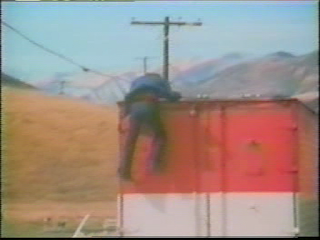 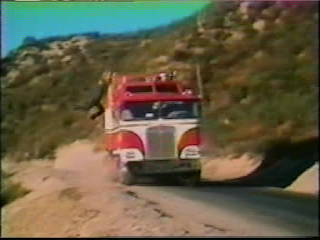 The stunting is great, regardless﻿

I'll stop there. There are plenty of other problems. But, I have to say: As a reboot of a once popular show, this doesn't bode well.** Bad plotting, nondescript characters, moments of general incoherence and less Evigan than we're used to. I'm not sure whose idea all this was but (for this episode at least) it's a bad one. I don't want BJ to have a "family." I liked his pals at Country Comfort that he saw on and off. I foresee the next episode involving BJ doing a lot of paperwork for the company. 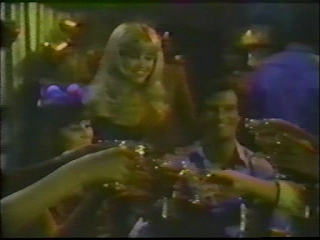 Now he's got a family!
Finally 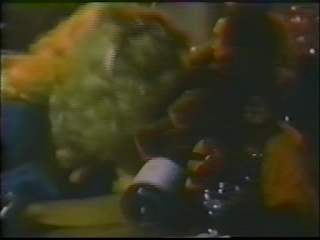 Why remove the wanderlust spirit? Why take a show about trucking and travelling the country and make it about a guy running a trucking company? Maybe the remaining 13 episodes will explain why they felt like this was the way to go. Probably, it won't. 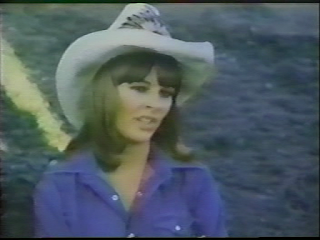 Still annoying even with the hat

Oh, and Bear is in here somewhere. 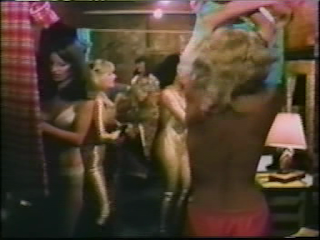 
* That reminds me of the Sixth Doctor's closing line in The Twin Dilemma Part 4. Take that as you will.

** I actually might not call these complaints, but "misgivings." All these things could be corrected or altered over the remaining 13 episodes.
Posted by Daniel B? at 8:38 AM 4 comments: