Amanda, Nathan and myself discuss Bad Ronald and Through Naked Eyes.


I'm also on another podcast (with Amanda and a bunch of great folks). It's called Podcastmania. It's, generally, horror-related. It is raucous, funny and we know what we're talking about. So that's something. Something good.

Both of these are on iTunes also. So, good times can be yours!

Email ThisBlogThis!Share to TwitterShare to FacebookShare to Pinterest
Labels: Made For TV Mayhem Podcast, TV

Sam, Abby and Leonard, it was great to know you! I really enjoyed my trip through the land of INTERSECT and all their enemies and Buffalo Bill and the DNA Stabilizer and all the other swell times.

Please click the link below to go back to all the reviews and re-live the fun.

A Cavalcade of Gemini Man Fun!

Please click the link below and go to Amazon.fr. Buy the DVD!

The final entry in the GEMINI MAN adventure begins...

Riding With Death is some sort of conglomeration of two episodes of the show that form a vague TV-movie of sorts. The episodes in question are Smithereens and Buffalo Bill Rides Again. This sort of thing isn't uncommon. The short-lived TV series The Master had its episodes combined into "movies" known as the Master Ninja series. Those were released on video. I used to frequent a video store back in the 1990s that had a shelf of them. So, although I never saw it on a shelf, presumably Riding With Death was somewhere around there.

On July 19, 1997, Mystery Science Theater 3000 Episode #814 aired and they riffed on Riding With Death. In fact, if people know GEMINI MAN, then they probably know it from this slipshod movie thing (whatever it is) from the MST3K episode. The episode is very, very funny. One of my all-time favorites. Not only is the riffing top notch but it includes two of the best host Segments ever in Tom Servo's song about the Funky Seventies and the new superhero...  Turkey Volume Guessing Man! Whenever they got a chance to watch something from the 1970s, the team hit it out of the park. (Track of the Moon Beast and Angel's Revenge are also two favorites of mine.) So, I recommend the episode. If you're a fan, you will laugh a lot. If you're not a fan, it might bring you over.

Riding with Death is something I have only seen in the riffed version, which is fine with me. I'm not here to review it. My reviews of the two episodes are here and here. My thoughts are clear: I really enjoy these episodes. The combining of the two for this movie whatchamacallit thing-a-ma-bob tarnishes them a bit with odd inserts, poor dubbing and some strange re-editing of sequences. This entry is going to consist of a few screenshots from the MST3K episode that show odd moments in the new edit. It's the sort of a thing a real GEMINI MAN completist will love. By that, I mean me. 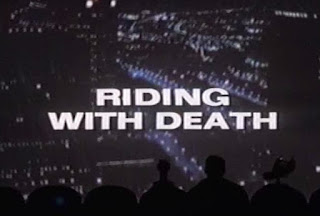 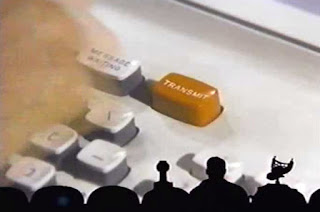 This is the magical button that makes all the shaky re-editing happen. 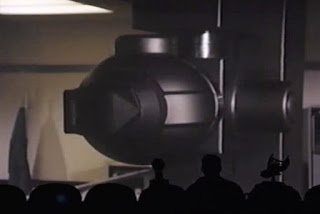 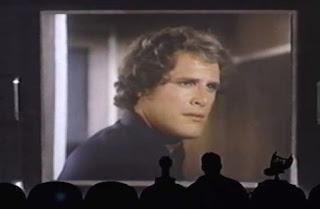 The TRANSMIT button shows us images of Ben Murphy. 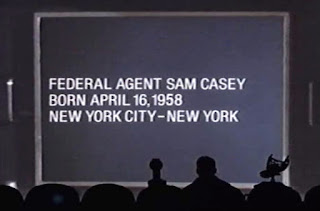 So, Sam Casey is 18 in the GEMINI MAN? That makes sense. 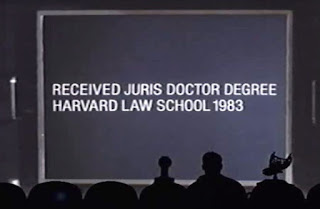 Wow! Really, Riding with Death? There's no reference to this in the show itself. It also means that the show takes place in the mid-to-late-1980s on some sort of Alterna-Earth where the 1970s went on for ages. Why would they add this? Why not just go nuts and make him a brain surgeon or a Spirit Elemental or Part-Time Batman? 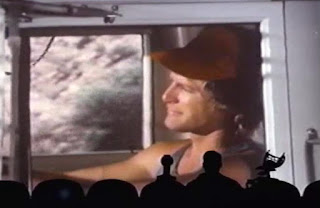 "Abby's a great gal." Hilarious moment in the MST3K episode. But, nowhere in the original. This leads us to Hazy Flashback Screens (TM) and scenes from the original TV movie. 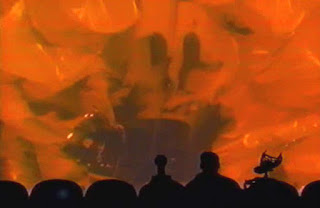 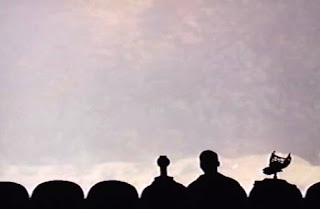 Poorly dubbed lines about Robert Denby lead us into the second half of the episode. And, yes, it is funny. 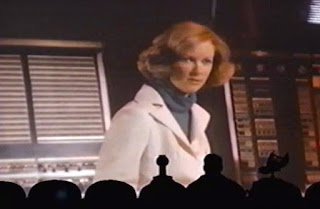 What is Abby looking at as she isn't actually in Buffalo Bill Rides Again? 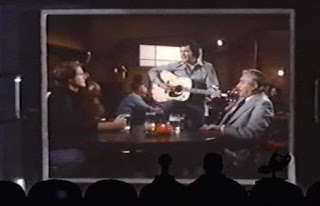 She's watching Buffalo Bill Rides Again! Why? Why include her at all? Leonard has a mustache in the second half and they add a badly dubbed line for that too.

Riding With Death is a hilarious episode of MST3K. It is a rotten episode of GEMINI MAN, however. I like to think of it as a Classic Celebrity Roast but done for a TV program. Laugh, enjoy, rewind and return to the start of the show. Sam, Abby and Leonard are waiting.
Posted by Daniel B? at 11:12 AM 6 comments: