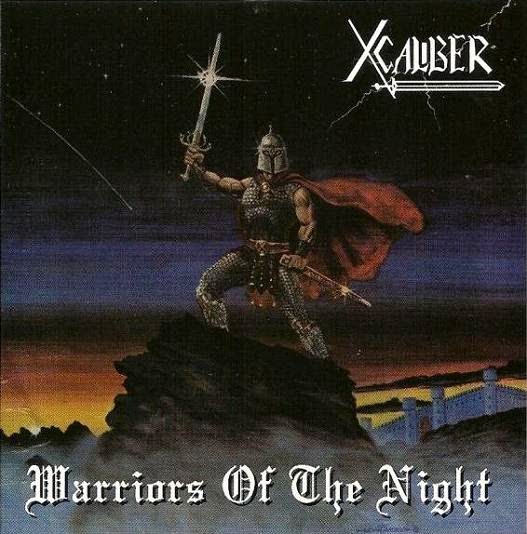 From Pittsburgh, PA, X-Caliber stepped out bold & proud to rain down 41 minutes of rocking majesty upon the world. Then, they vanished. Where did they go? Why didn't they put out more music? If Warriors of the Night is anything to go by, these guys had a few cool rocking tricks up their sleeve. It alternately saddens and fascinates me when I come upon a great band that put out one album and then...  who knows? So, let's look at what we have here. And, after we wander through the record, you can read my nutty idea behind what I think it's all about.

The album begins with the song Runaway, which has one those great metal riffs that you feel like you've heard before (maybe you have) but it pulls you in and gets your head moving. The sound is a bit on the primitive side. It has that crunchy guitar that a lot of independent American metal bands had around this time. I'm not sure what it's from. I always imagine that they're not quite getting the sound of the guitar recorded right. But, the sound is cool and the riff is nice. The song stops for the verses to give us some acoustic strumming and then the electrics kick in again. It's about a young man who has had problems with love and has, basically, run away from his life. Don't let the 5 1/2 minute length scare you off. The rocking intro mixed with the acoustic verses keep the time cooking along.

Warriors of the Night  is the epic title track that begins with stormy sound effects and acoustic guitars. And, yes, an echo-laden, portentous voice. The voice begins to speak of an old system weakened by the forces of evil. It talks of the new system formed from the strongest warriors. Then, the song rocks to life. Yes, that portentous narration is almost a staple of quite a bit of 1980s heavy metal. If one had the gumption, they could put together quite a collection of songs with medieval-themed narration. But, this song plays a bit of a trick...  After the chorus, things fade and the narrator returns. When the song kicks back in, it doesn't do another verse-chorus. It runs through a raucous instrumental section. The unexpected moment of variety boosts the song and makes a good song even better.

The next song is, like Runaway, a good straight on catchy, classy rockier. The Sword had got a strong riff and a good chorus. The beat during the verse has got a great bounce to it. The warriors have banded together and now they're singing a song about themselves. One of the things that always worries me about albums like this is that there will be a lack of variety or that the album will just fade, interest will be lost as it goes along. Luckily, this one keeps it moving.

And, Tell Me Why is a great way to change it up. Song #4, the final song on a very solid Side 1, is a great catchy, almost pop, number but with a touch of the hard rock/ metal in it. The lyrics are straightforward ones about a man questioning why the love of his life, in fact, loves him. Hey, it's something we all wonder on from time to time. And, after two epic tracks about warriors and swords and such, it's a surprising one to hear. It's also a very good one.

Side 2 opens with another obligatory 1980s metal/ hard rock staple: the song where the band sings about how much they love rocking. Whether they sing about playing metal or rock & roll itself, every band seemed to have to have one of these in their repertoire. When your repertoire consists of eight songs, it better be a good one. Luckily, X-Caliber have done it right. The song opens with some cool electric guitar noises culminating in that thing where the guitarists run their pick up the neck of the guitar and it sound like music being ripped apart. Then, the song kicks in and Rock's Alive! Not the best song on the album but it's to the point, catchy and it has a nice bridge.

Don't Say Goodbye is from the same realm as Tell Me Why, a catchy almost-pop rocker about a guy having trouble with his love. (This being 80s metal, I'm guessing it was a gal.) This tune isn't quite as good as Tell Me Why but, having said that, I like it. It rocks. It's catchy. I can feel the emotion in the singer's voice. One wonders why the rocking of the previous songs got blended in with these two more pop-ish numbers. But, again, if you've only got one album, include everything you can do on it.

Now, we reach the penultimate song: the longest one on the album, Told You Not To Run, which, lyrically, is more aggressive than the other ones. As with the rest of the album, there is a great riff. The two guitars bounce off each other nicely. The melodies are catchy. But, this one breaks it down about halfway in. The acoustic guitars start up and the singer begins a more soulful rendition of the title. Then, the middle instrumental section kicks in and it is almost prog rock-like. Some great guitar. The drums and bass are kicking ass. (In fact, the bass is the unsung hero of this album. Coming in with some great rhythms and melodies throughout.) This instrumental section is possibly my favorite 2 or 3 minutes of the album. The rhythm they beat out at the end is awesome.

The album closes with the very odd Someday. Much shorter than the other songs on the album. It's all acoustic guitar and mournful, slightly distant and echo-laden singing. It's a melancholy closing to the album. And a strange one. The implication of the song being that something has ended. Something big and important.

Could it be X-Caliber itself?

Here's where I go loopy:

I think Warriors of the Night is a concept album. Bear with me. I have several interpretations. I will give one now.

There is a young man who has trouble with a lady friend. Their relationship has been a stormy one. But, he thought it was for real, for true. It has ended by her choice. So, he ends up looking inside of his own life and finding nothing there. He leaves his life for pastures new. (Runaway). He meets up with some guys and they form a band. (Warriors of the Night) A righteous metal band that is going to change the face of music. They're doing their own thing. They're full of energy and life. The New Kings of Heavy Metal! (The Sword)


Although they believe that they are the New Warriors of Rock & Roll, they end up doing what most guys do: writing love songs. The Warriors are no different and the young man writes one harking back to his time spent with the gal who ended his previous life. It's much more catchy and status quo than they expected. (Tell Me Why) But, it gets them some attention. And they start to gain in popularity. And when one is being paid attention to one draws attention to what they're doing to get more attention. (Rock's Alive) Although that song is in keeping with their original band intentions.
Then, their big hit comes out (or maybe only a big hit in their mind), the follow-up to Tell Me Why: Don't Say Goodbye. Another pop number about his ex-. The band is at the height of their popularity.

(Whether that is worldwide popularity or just headlining a small club is unknown.)

Now, either the guy gets back together with the gal and begins to treat her badly or, more likely, he imagines himself back together with her and not treating her very nice. The band's final big song (Told You Not To Run) is much closer to their original intentions. It also has a darkness that is not fitting in with the rest of the Big Hit music they had. So, when band members begin to work in contradictory directions, they break apart. But, it's not with animosity. The most that the singer can say to his fellow band members as they come apart is that "You're so wrapped up in policy/ All of the time." The band comes apart, maybe to reunite one day. (Someday)

I have other interpretations of the material. One is that the two poppier love songs are actually flashbacks playing in the head of the guy while the band writes the other material. But, this could go on for an eternity.

Where are X-Caliber? Did they have more material? Is my interpretation of their album complete and utter nonsense? Frankly, it's a great album. You should give a listen, especially if you love obscure 1980s metal from the heart of America.