BJ And The Bear S1 Ep1: Odyssey of the Shady Truth It happened! BJ And The Bear, the actual series, has begun. After a successful TV movie in October of 1978, the show was picked up by NBC as a mid-season replacement. It had ten episodes to prove itself. And it had a strange twist of pop culture providence to help it along. As I mentioned in the review of The Foundlings, Glen A. Larson's newest venture seemed to hit every pop culture button at the time. However, it actually came two months before Every Which Way But Loose when truckers and simians became all the rage. And, it was three months before The Dukes of Hazzard began. 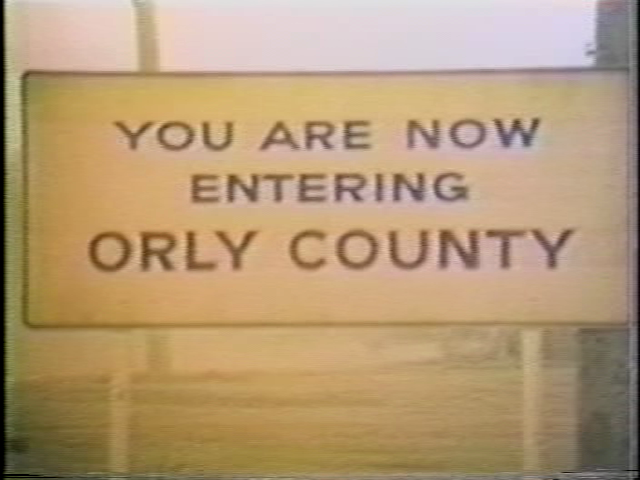 Even our Big Macs are corrupt

Odyssey of the Shady Truth aired a month-in-a-half after the Clint Eastwood vehicle became a huge hit and one month after the Duke boys began racing up the ratings. So, what seemed like it was ahead of itself four months previous was now right in with the zeitgeist of the times. That's planning. 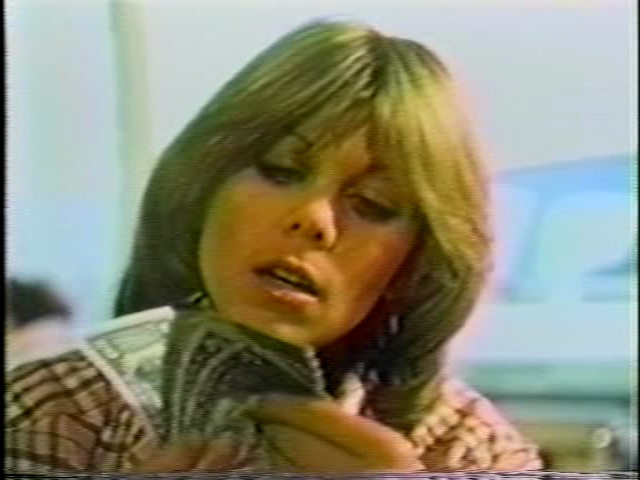 The story behind the first of the episodes ends up being a condensed variation of the pilot movie. A woman named Barbara Sue (played by the awesome Jo Ann Harris) gets BJ to head back into Orly County to pick up a load. But, it's a trap. Sheriff Lobo with Perkins, as a Deupty now, jail BJ. But, Barbara Sue can't let BJ rot in jail so she breaks him and some others wrongfully imprisoned by Lobo out. The race for the county line is on again! 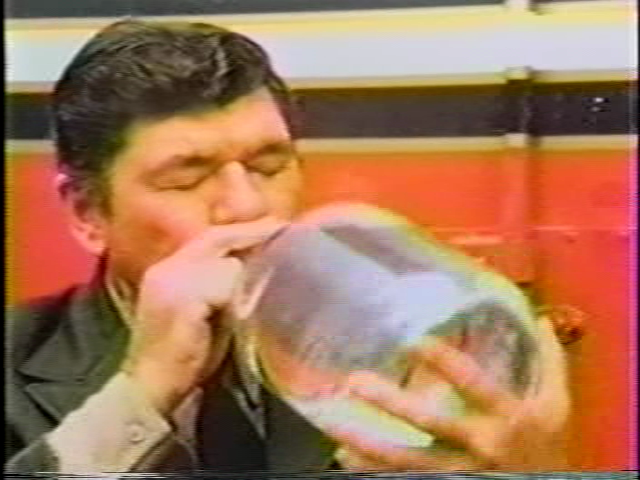 It does seem a little bit remiss of BJ to want to head back into Orly. (Or, in fact, to be eating at a diner anywhere near it.) But, one imagines that he thinks Lobo has probably been put away for a very long time for the awful stuff he did in the pilot movie. Strangely enough, he hasn't been. In fact, Lobo is doing better than ever and Perkins, his main accomplice, is now second-in-command. Not sure how that happened unless Orly County is the most corrupt county in the United States. (And that could be true.) 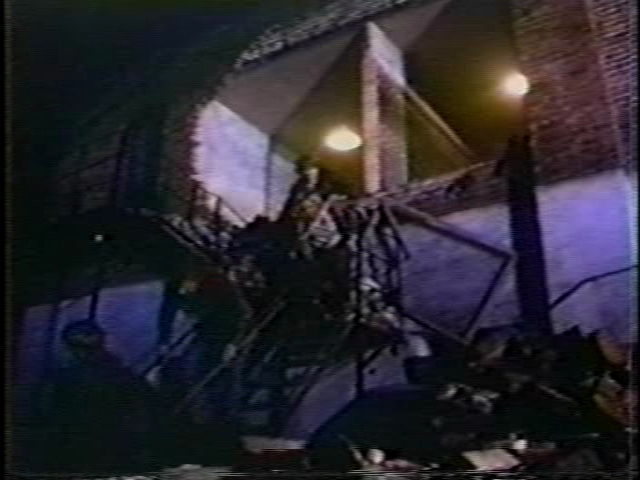 When is a jail not a jail? When it has no wall

Everyone in Lobo's cell, including a man named Banjo who hauled moonshine, one of those TV drunks who is drunk all the time regardless of whether he has access to booze and two young women, one played rather hysterically by Randi Oakes, has been wrongfully imprisoned. And, Lobo is stealing shine from the supplier and selling it on his own. It's all very shady. Luckily, Barbara Sue ties a chain to the jail cell window and, using BJ's rig, rips the brick wall off the side of the building. It's pretty cool. 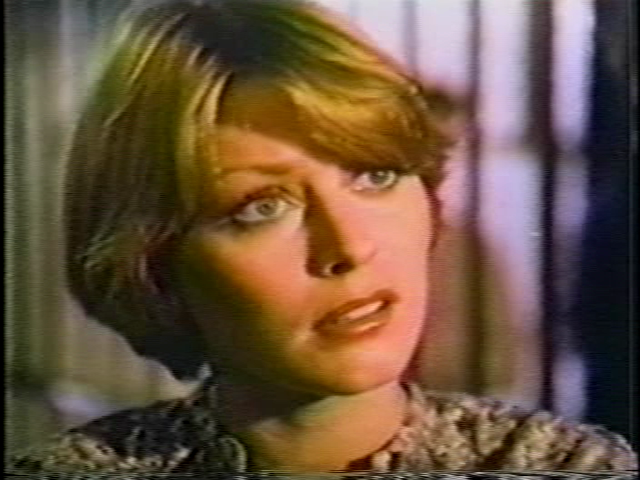 Randi? Are you thinking about Battle of the Network Stars?

Then, the mayhem begins. This time a little more playful than in the pilot. Many, many police cars are destroyed in assorted and amusing ways. Lobo and Perkins have their car slowly whittled down piece by piece. That's pretty funny. It all culminates with a ride on the Shady Truth. That is a river barge owned by Barbara Sue's uncle. And the image of the barge hauling the big red rig behind it down the river is very cool. 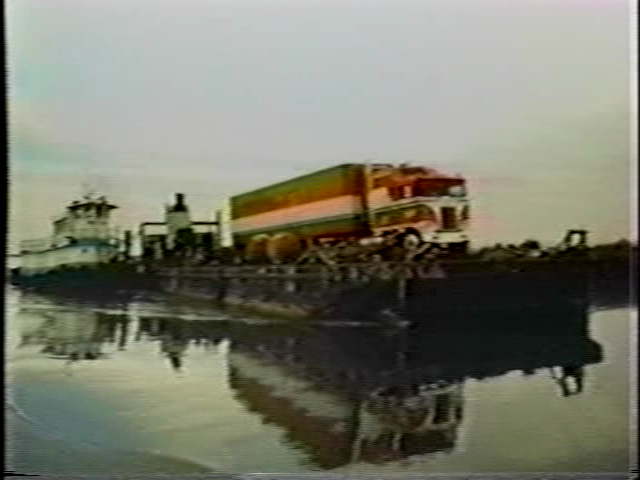 For being a, more or less, remake of the pilot, this episode acquits itself well. It has heroics, excitement, drama and humor. And, yes, a bunch of great chimp action. (Although, Bear doesn't have quite as much to do as he did in the pilot.) BJ's wit and intelligence are going strong in this episode. Plus, he has a little bit more of a romantic squeeze on Barbara Sue than he did on Stilts. Once BJ is free from the jail, he sets up a series of tricks, diversions and stunts to get him and the bunch he's with around the roadblocks of Lobo. 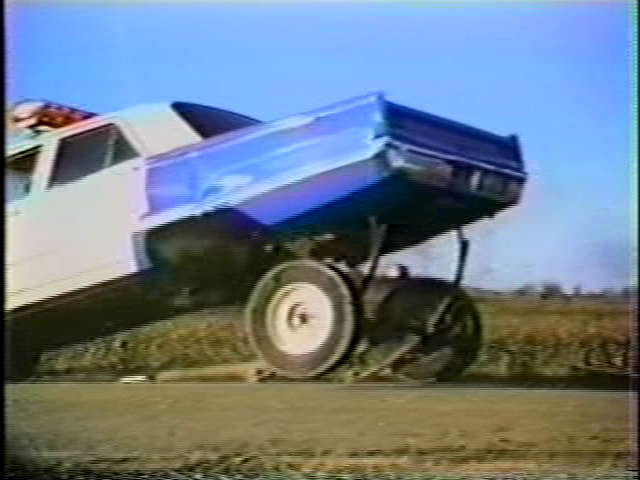 That's a Comedy Car if ever I saw one

The episode is very entertaining. It's got a nice pace to it. The set-up, getting BJ into prison, happens quickly. The sequence in the jail cell is just long enough to establish that Lobo is corrupt and sleazy but a little goofy. And then the chasing begins and it doesn't stop until the end. There were only two problems I had with this episode as it went along but neither of them is a big cause for concern. 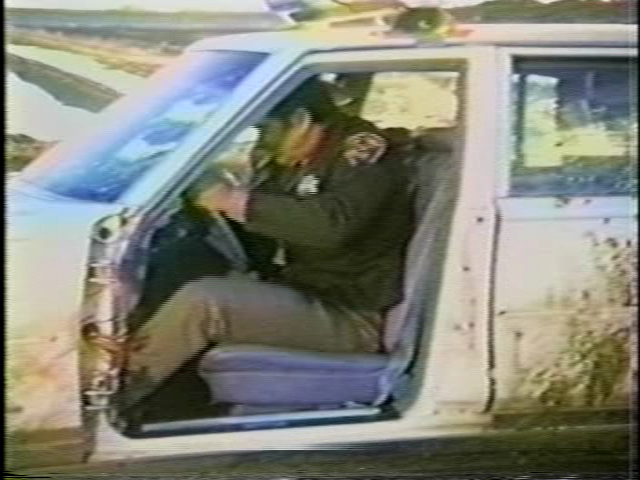 Not a scene from Planes, Trains & Automobiles

The first is that darn county line. In The Foundlings, it was nebulous. BJ was passing through and took the job. They were stuck in the woods a lot. One hoped that they were moving towards it but one was never sure. In this episode, the county line is still--  where is it? There's a lot more water involved in this episode. One would think the rather lengthy trip down the river would have helped. But, they never seem to actually get any closer to getting out of Orly. Which leads to the second problem. 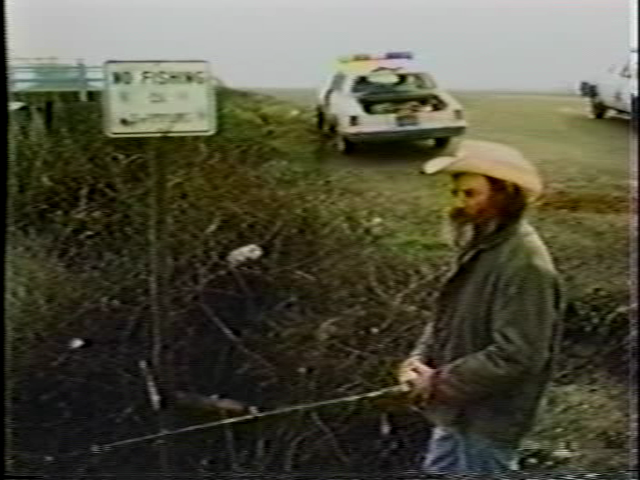 I feel like this guy was in The Milpitas Monster

The resolution of the episode. Shady Truth has the same ending as the pilot. BJ and his passengers run and run and run. Eventually, the day is saved by them coming across someone who can stop Lobo from going any further. In The Foundlings, it's the Army. In this episode, it's Seth McClellan, the moonshine man that Lobo is ripping off. Yes, the day is saved. BJ and pals make it out safely. But, BJ doesn't actually save everyone. He just keeps everyone out of harm's way until someone else can come along and do it. That's not so great for a show with a hero in it. If BJ was played by Don Knotts, that would be one thing. But, here, the hero should be doing the saving. Time will tell. 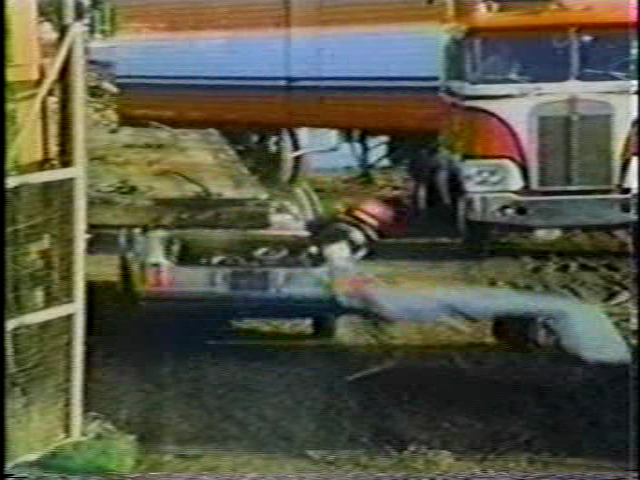 The top half of Lobo's car goes a'reelin'

Odyssey of the Shady Truth, flaws aside, is an entertaining opening episode for the series. If you watch this one and like it, there's a very good chance that you will get a kick out of the nine remaining episodes from this season. I enjoy them. Granted, Lobo is only in three more episodes. So, don't get too comfortable with him. 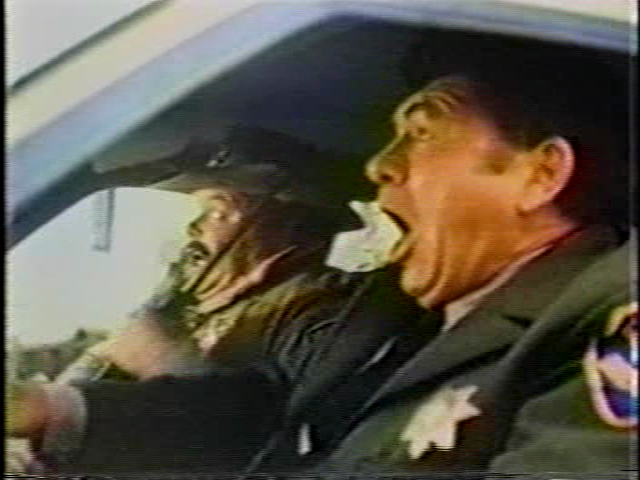 The basic face one sees in The Misadventures of Sheriff Lobo
Posted by Daniel B? at 9:29 PM