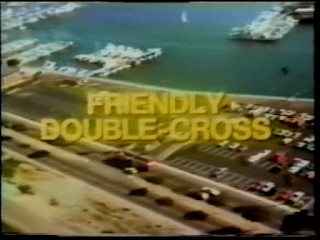 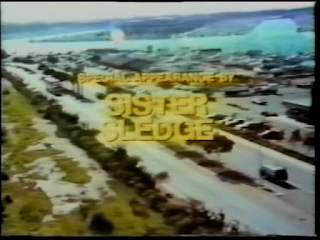 Take a breath, everyone. We're at the end of the Second Season (the only full season) of BJ and the Bear. Ahhh...  feel good? I know I do. It's been a long haul. (Get it?) But, we made it. Does the season go out with a bang or a whimper or something kind of in between? Let's check out the Friendly Double-Cross and see. 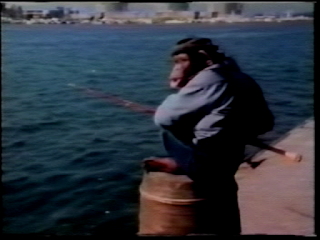 This week on Fishin' With Bear

Bear and his best friend BJ McKay head down to Miami. (Voluntarily) They go to visit an old 'Nam buddy named Charlie. Charlie is a loud, flashy guy who runs a helicopter charter service. He takes BJ out on the town, flies him around the harbor, introduces him to Sister Sledge and has a run in with a disgruntled (yet very attractive) female harbor patrol officer. She learns who BJ is and thinks he may have something to do with a shipment of cocaine that's passing through. (Spoiler: He has nothing to do with the shipment of cocaine that's passing though.) There are some sort of mob guys hanging around who are bugging Charlie about something. And then...  Charlie's helicopter blows up with Charlie inside. And, BJ and the female cop set out to investigate his death. Was it the mobsters? Was it BJ? (Again, no.) Or was it someone else? 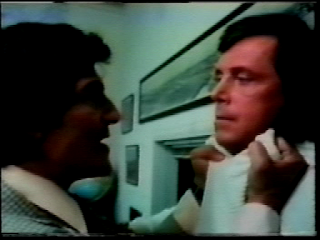 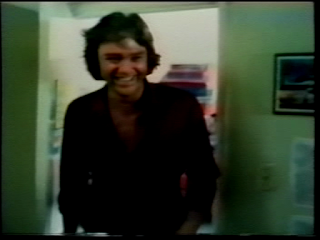 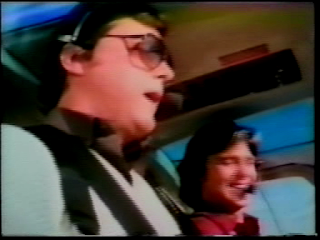 The Chopper Boys are Back!

I'm not going to give it away. But, the way the story resolves itself was fairly clever. I didn't fully see it coming and that was nice. The episode, as with most of these episodes, has a nice pace to it. It seems to be going in one direction but then shifts abruptly about a third of the way in. I liked that. Sister Sledge performs their latest single Reach Your Peak. And, they're singing We Are Family when BJ and Charlie enter the disco. (They flirt with BJ a lot.) Charlie is properly Miami-garish. I was almost relieved when he died because I thought "I can't watch this guy for another 25 minutes." Plus, Bear gets a scene where he tears a hotel room apart! Bear's a rock star! And he throws a flower pot on a goon's head! 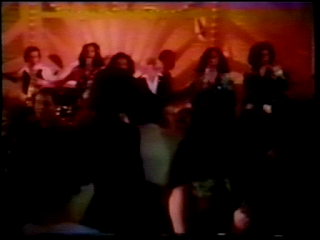 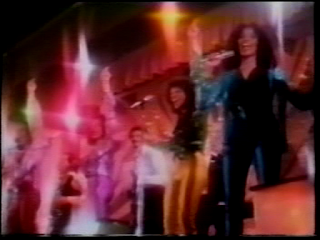 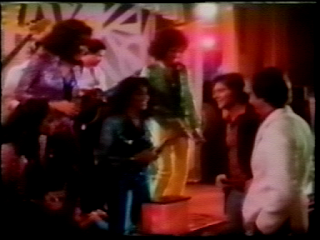 All the ladies flirt with BJ

The problems with the episode are minimal. The mobster and his goons are really thinly drawn. Every time they appeared on screen I felt like I was seeing them for the first time. Most of their scenes are in the same sort of two shot featuring Mob Boss and Head Goon. I never really got them.  The main problem is how similar this episode is to the previous one The 18-Wheel Rip-Off. Both of them have discos. Both of them feature an attractive female officer of some kind who is initially suspicious of BJ but then falls for his charms. Both feature BJ visiting an Army buddy who may (or may not) be shady. Both end with BJ in an embrace with the aforementioned uniformed ladies. Both of them feature two main bad guys who are up to some shady stuff. (Mama and Cordell are better drawn that Mob Boss and Head Goon. But, this episode has a better twist.) OK, that last one may be stretching it but there are some big similarities between the two. Should there be? 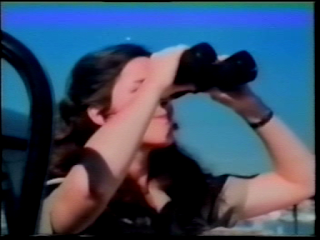 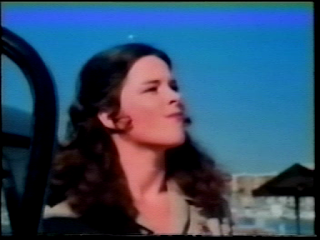 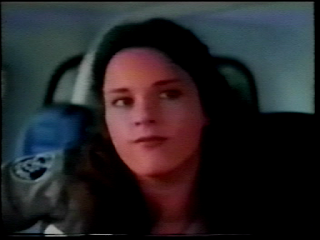 She favors a certain facial expression

I've always mentioned that the show has a limited bag of tricks. But, this just seems odd. Meeting up with an old Army buddy? Sure. I can see that happening once a season. A female cop being suspicious of BJ and then falling for him? Maybe, again, once a season. But, to have both of these things occur in two consecutive episodes seems like someone got confused. Or maybe the running order of the episodes got mixed and these should have been separate? I'm not sure. They are the most "regular" BJ and the Bear episodes in a while (and I am grateful). I just don't get them being back to back. (Although, I just had a thought about this one that I'll save until the end.) 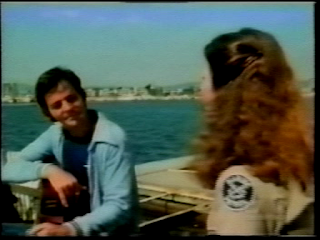 Jim Stafford is in this! He still doesn't like spiders and snakes. I preferred him as Buffalo Bill in Gemini Man. He plays Mako, the guy who runs the local bait shop. He may have a very shady past.

Oh, here's an odd Bear moment. BJ, Bear and Lady Cop (or not quite Lady Cop) are on a ship that they think may lead them to the cocaine. On deck, they are accosted by all the bad guys who burst into a shootout. BJ and the officer leap off the ship. The bad guys are caught. And, our trio return to the ship and solve the mystery. My question is: where did Bear go when these two were leaping off the ship? He's with them until the shootout starts. Then, he vanishes. But then, he's with them again when they return to the ship. Is this episode telling me that BJ suddenly forgot about his best friend during a shootout? I doubt it. The director and script supervisor probably forgot he was there. Continuity error. Still it's an odd moment. 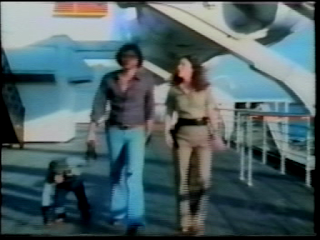 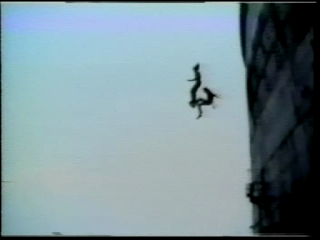 OK. What'd you do with Bear?

Here is my theory about what this episode is...

What is my evidence? Well, they spend a lot of time with the officer. They establish that she's too rambunctious and has screwed up a bunch, that's why she's on Parking Lot duty and not out on the water. She spends a lot of time investigating BJ, including getting a rundown on him from My Girl Bill Stafford. She has a boss who shows up three times, blusters at her and then goes away. He feels like the Michael Pataki or Eve Arden character from The Girls on the Hollywood High. He makes his presence known but he's under-developed. As if, they were planning on doing more with him later. There is the shady past of Mako, which is mentioned and then never comes up again. Why mention it? Why bring it up unless you planned on doing something with it later? There is the establishment of the mob in this area and that a lot of stuff goes down in this part of Miami, And, the big one: The exteriors are all shot in Miami! Why? BJ drives all over the country but never actually really leaves CA.* Why go across the country to Florida for the season closer of a show whose ratings are dropping? Unless you are up to something else. I smell backdoor pilot! 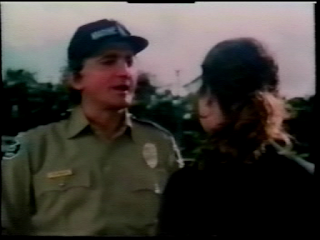 Captain Ornery, at your service

It would be about this lady proving herself in the Harbor Patrol to her gruff boss and the other members of the team. She'd get in all sorts of adventures while teaming up with Jim Stafford, who would sing a song a show like Connie Stevens in Hawaiian Eye. It would have been great. I would have watched it. 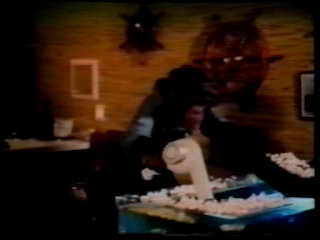 Unless, it wasn't actually shot in Miami. If it was Long Beach or Marina Del Rey, ignore those last two paragraphs. (I'm pretty certain that's Miami, though.) 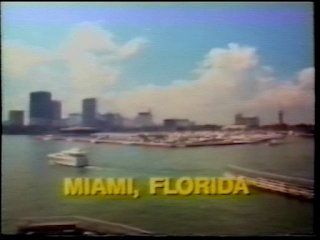 Why on Earth would a Glen A. Larson show lie to me?

Season 2 ends with a couple of super fun episodes. They'd diddled with the formula throughout portions of the season. But, they returned to Basic BJ for these two and I'm glad they did. I won't give a broad overview of my thoughts for the season. That will be a separate column. But, I will say that when the show returns, it will have a format change, including a new-ish opening credits sequence that will come as a surprise. I am taking a break from the show for a bit. Going to write about something else. But, we'll be back for Season 3 soon and it will be a good time. Stacks! 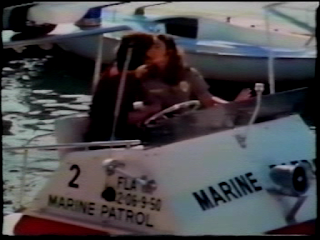 Marine Patrol? What the heck?
I thought they were the Harbor Patrol 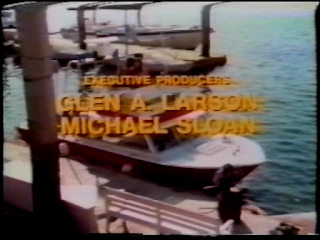 The end of Season 2

*Unlike shows such as Route 66 and Movin' On, which did travel around the country.
Posted by Daniel B? at 8:49 AM