The Balld of Molly Turgiss! (It's Green Acres, everybody!) 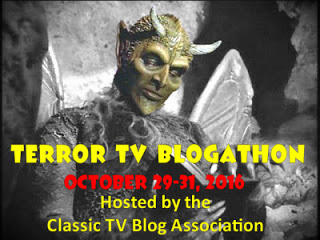 This post is part of the Terror TV Blogathon hosted by the Classic TV Blog Association. You can click here to read the other scary entries. 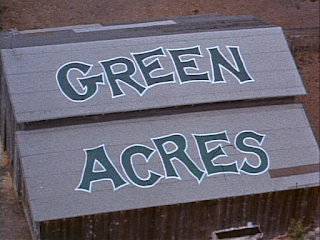 Molly Turgiss is a legendary (ex) resident of Hooterville. The locals call her "You Know Who." If you say her name, something will fall off the wall, something will shatter or something will fly across the room and hit you in the behind. She's a poltergeist who can manifest herself in mirrors, a supernatural phenomenon. Or, as Lisa says, "a stupid unnatural phenomenon." Molly was an ugly girl who grew up to be an ugly woman. The townsfolk taunted her out of town. Now, her spirit punishes the people of Hooterville through random annoyances whenever her name is invoked (or just casually spoken). My favorite thing she does is driving people's cars away and parking them illegally in adjacent towns. (She may be ugly but that's a good sense of humor. I like a gal with a good sense of humor.) 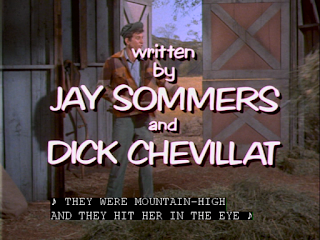 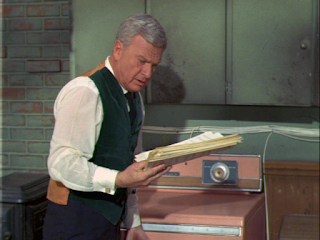 Don't put a man's solk fongs in the washing machine﻿

This is, officially, the point in Green Acres history where Jay Sommers & Dick Chevillat (the men who wrote almost every episode) teeter the show into Looney Town. But, luckily, they never forget to include the laughs. (I laughed out loud 23 times during my most recent viewing of this episode. I even laughed at numerous asides from Oliver that the laugh track didn't acknowledge.*) The yuks start early with Eb singing the goofy, but tragic, "Shed a Tear for Gertrude" pass by Lisa's "all-electrical breakfast" through Sam Drucker's confusion over Lisa's shopping list (all exotic foods, no hominy or the like) through, well, everything. Mr. Ziffel falling asleep during Oliver's solk fong recital after dinner (what did Lisa make them?) is a highlight. Especially when he bursts awake applauding and Lisa says there's still another verse. Fred: Oh, I guess I can sleep through that one too. This show always, truly, makes me laugh. But, to carry on... 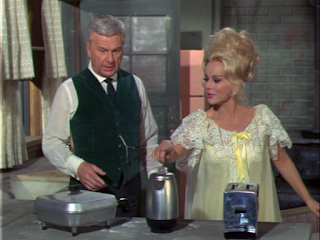 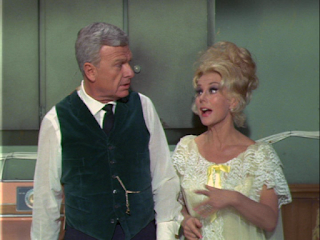 The Ballad of Molly Turgiss is not a hoax. Not an imaginary story. This isn't Molly's daughter doing something. It's Molly. The ghost of a very ugly woman who throws things at people who say her name. I'm glad Jay and Dick followed through and made it a real supernatural thing. Although, should I have expected less? (The only time the show pulled a fast one was in A Square Was A Round. But, even then, they had a trick up their sleeves.) This is, after all, a show where credits appeared on hotcakes. A show where Oliver gives speeches about the American farmer and Yankee Doodle-type music starts playing that Lisa can hear but not Oliver. And, let's not forget the Romeo and Juliet episode where Arnold the pig falls in love with Cynthia the dog, culminating with a subtitled talk between pig and dog. (That pig is a charmer. No wonder the dogs like him.) 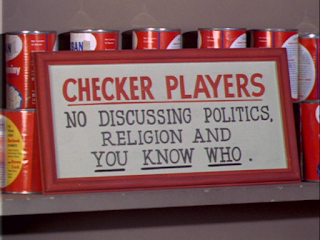 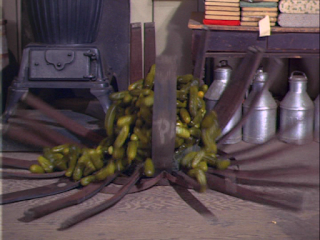 Lisa saves the day by applying an inordinate amount of make-up to Molly. Miss Turgiss leaves town and goes somewhere-or-other. Maybe to haunt Crabwell Corners? But, a thought always occurs: The people in Hooterville are good country folk with an odd bend to them. Did they really hound this woman so horribly that she left town and, possibly, killed herself because of it? (They don't say that but that's where these stories generally end.) Could you see Mr. Kimball's dad or grandad laying into Molly? Maybe Mr. Ziffel or his dad but not Mrs. It's a casual bit of legend that adds a touch of darkness to the town. Could Hooterville have been a much more ominous place that changed its ways after the Molly Debacle? I, for one, would be up for seeing "Hooterville: The Early Years." (It could be like "Dallas: The Early Years" but with Dale Midkiff playing a young Fred Ziffel.) 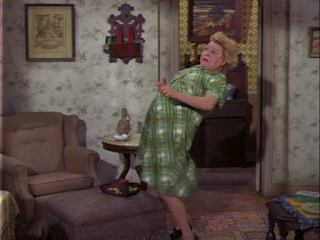 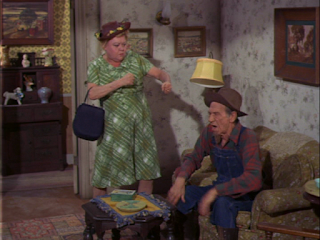 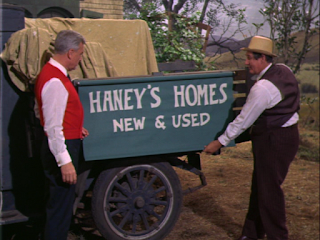 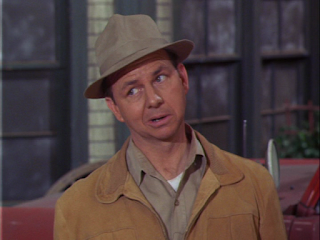 The Hooterville folk dealing with Molly
(Yes, Mrs. Ziffel is getting kicked in the behind)﻿

I can't end this review without discussing one of my favorite running bits in the episode: Solk Fongs! Throughout college, Mr. Douglas collected folk legends and made them into songs. That is awesome! But, for a man who loved the countryside and farming so much, should we have expected anything less? I love everyone's general confusion over why Oliver would do this. It's one of the few times that Oliver is actually completely right. Those legends should be preserved. Maybe Oliver's songs aren't the best but he's trying. I love the thought that he's planning on doing a small impromptu concert of his solk fongs for the folks over for dinner, including his song for Molly. Which isn't very good but not without its charms. (The way everybody ducks in their chairs when Lisa says Molly's name in the end is pretty hilarious.) 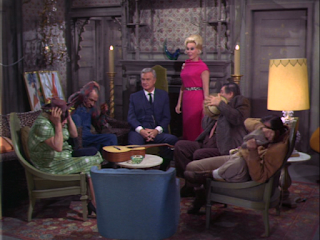 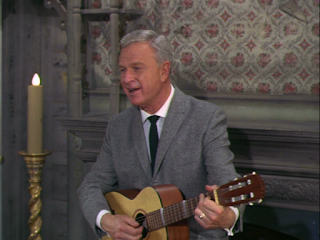 ﻿
The Trouba﻿dour!
By the way, Solk Fongs get their own credit in the closing roll! Excellent. Credit manipulation in and around Hooterville has officially begun. 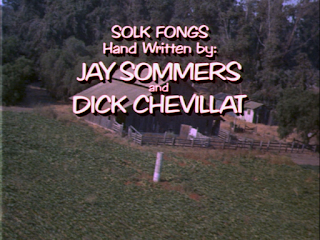 This episode may be fudging it a bit for "Halloween" entertainment. But, it's a scary as Green Acres got. Most of it is gloriously silly, with each member of our ensemble (although no Alf & Ralph) getting to do their pieces. It does have some semi-creepy moments. The eerie music that plays whenever someone is looking in the mirror and saying Molly's name is great. Molly's first appearance in the mirror while Oliver is shaving is rather unnerving. ("Molly's a great shaving watcher.") Molly's ghostly arm beckoning from around the door is well handled. Not a lot of "scares" but a lot of laughs and, in the end, Lisa helps an ugly woman become beautiful. Plus, Oliver gets his guitar smashed over his head by a ghost. You can't beat that. 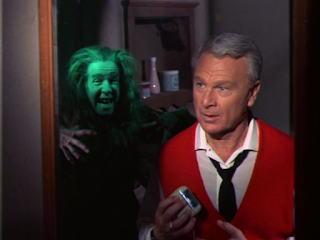 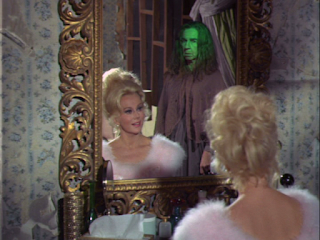 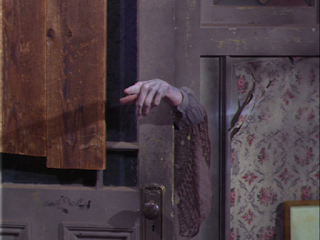 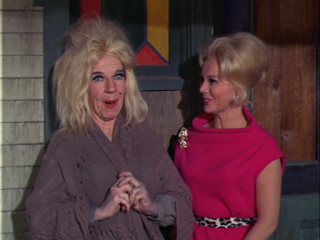 *In The Hooterville Handbook by Stephen Cox, it is mentioned that Jay Sommers (producer/ creator/ writer) used to be in charge of the laugh track. He was a smart and shrewd man. I can imagine him Not punctuating certain funny moments and allowing the audience to catch them. That sounds like  crazy talk but watch the opening kitchen scene, especially when Lisa and Oliver are around the outlets. Lisa says something funny. The laugh track clicks on. Oliver makes a funny face in response. No laugh track.

Which, of course, begs the question: On a show with a laugh track, is a funny moment that doesn't get canned laughter a joke or some sort of mistake? Of course, then you could ask "What are all those things the laugh track is laughing at in a show like Small Wonder or The Munsters Today? Because they sure aren't jokes." 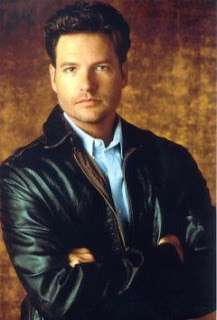