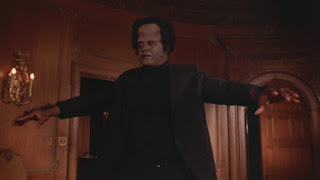 Directed by William A. Levey

Media Home Entertainment VHS
If I ever lost my arms and legs…And, if I had a girlfriend who was a loving physicist named Winifred…And, if that girlfriend knew a Dr. Stein who could prepare bottles filled with yellow liquid containing “DNA Formula”…And, if Dr. Stein said he could put new arms and legs on me…And, if the side effect was that I would go out at night with a big, square head and start killing people…And, if I could spend five minutes with the comedy stylings of Andy “C”…* If all these things came together and someone hired William A. Levey to direct it all…


Then, yes, I would be the happiest man in the universe because I would be — Blackenstein.**


A world where everything is confusion and nothing seems to make sense. A dark, disjointed place where people have dinner at long, dark tables surrounded by pitch-blackness in the middle of the afternoon. A place where a large-breasted woman is always right around the corner just in time for a monster. (Such a wonderful place.) “Why does the man you experimented on and gave new limbs to periodically turn into a fellow who looks a lot like the Frankenstein Monster?” No one asks it. Why would they? No one retains much memory from scene to scene.


A New World is envisioned with every passing moment!


This is not a particularly nice world in the average human sense. It’s dark and grotty. A lot of people being ripped open. A lot of dirty jokes. A lot of people being unpleasant to one another. But, Blackenstein always looks like he’s having a good time. He is “connected to his work” in the best possible way. A man likes to know he has accomplished something at the end of the day (night). Blackenstein knows he has. He has the entrails to prove it. And, they made a movie about him. Can you say the same about you?


I thought not. Connect with your job more, why don’t ya?


Eddie, Dr. Stein, Winifred, Malcomb, Andy “C”, that woman who looks like my Aunt Mary, Topless Sally, Girl in Dune Buggy, Bruno, the hospital attendant with the chip on his shoulder, the three guys at the club who could be pimps but might not be, Steve. Don’t you want to know these people? Blackenstein holds out its damaged but loving hand and says, “Join us! We’re not just a horror picture, not just blaxploitation. We’re something greasier. More alive and more boring, often at the same time. It’s a dark world but there is love and where there isn’t love there’s an old lady who wants to stay young and a laboratory straight out of the corner of some warehouse. Why not travel with us and learn? We’re like life. You never know what crap is going to hit you in the face next.”


A picture of the monster can carry you into the film but it requires some stamina to make it through. If you do, however, director William Levey has promised me that he will thank each person, individually, with a hunk of 5-year-old summer sausage he recently found out back in the shed behind the trampoline that his kids used to use but now just kind of sits there rusting. He believes the stock of summer sausage was meant to be a gift of some kind that was forgotten when they had Great-Grandma Fannie staying with them after she had her hips removed and accidentally replaced with artificial shoulders. Funny, but not practical for walking. (Of course, a neighbor could have been hoarding the sausage back there against Mr. Levey’s wishes.)


AUDIO AND VIDEO
Succulent & Sumptuous, respectively. Media always comes through with the Greasy. I know this is on DVD but why, Good Lord, why?


EXTRAS
You think you’re going on a Carnival Cruise? You’re watching a film called Blackenstein. Expect nothing and enjoy.


FINAL THOUGHTS
If everything I’ve said is not incentive enough for spending an evening with everyone’s favorite black Frankenstein Monster, let me quote the Cardella Di Milo’s theme song: “Sometimes I drink! Sometimes I cry!” Amen. Sometimes I do them at the same time. And, sometimes it’s great. Thank you, Blackenstein.
Posted by Daniel B? at 11:07 AM