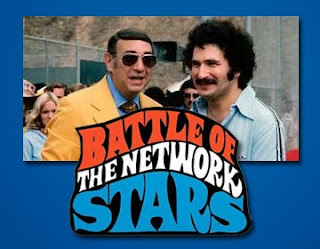 One of my favorite television shows of all time premiered 40 years ago today. The first episode of Battle of the Network Stars hit the airwaves on November 13, 1976 on ABC. A new episode premiered (more or less) every 6 months from November 1976 to May 1985. A final episode aired in 1988. It may have spanned over 10 years but there are only 19 episodes. So, yes, it does fit into the world of Eventually Supertrain, the short-lived TV show podcast.

Join my wife, Madelynn, and I as we discuss/ comment on this historic episode of television.

Follow this link to everything you need...  And Enjoy.