What Ever Happened to Bear? 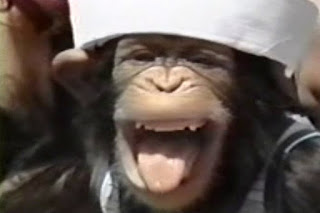 This post is part of the TV Sidekick Blogathon. Click here to check out the other posts from a lot of awesome people writing about a wide array of sidekicks.

For three sweet seasons, the world was invited into the truck/ home of Vietnam Vet/ ladies man B.J. McKay to follow him on his adventures across America on the television extravaganza B.J. and the Bear. "Trucking and Loving" was the motto. Along with B.J., there was another member of this big rig: Bear. Bear was an ex-Vietnam Vet also. He was gregarious. He was opinionated. He could be a bit crazy, especially when he was drinking. Plus, he was a chimpanzee. A 20-year-old chimp who enjoyed the public eye for a few years on this well-loved and well-remembered show. He even appeared on the much-lauded Battle of the Network Stars, for Heaven's Sake. (It's the episode everyone remembers because when Bear and B.J. arrived at Pepperdine University the name "Greg Evigan" appeared on the screen. Who?, America said. It turns out that was the name of the guy who did the captions for the network. He was having a laugh. See below for a screenshot of that moment.) 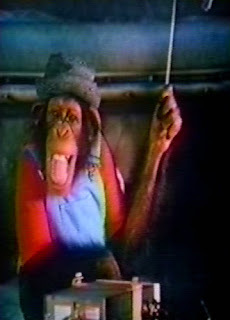 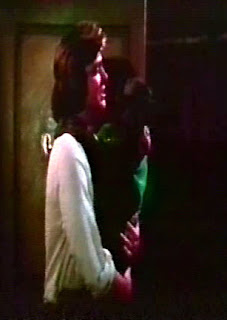 But, what become of Bear? A chimp's average lifespan is around 50 years. So, he must have had a life beyond his time with B.J. There isn't a whole lot of info out there. But, constant research has helped me piece this together... 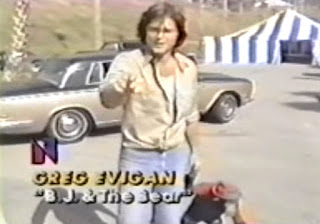 Even the Caption Guy wants to be immortalized 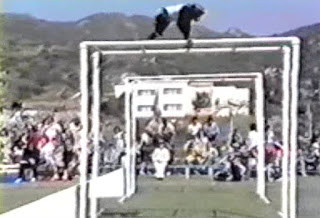 Battle of the Network Stars!
Bear beat Howard Hesseman in the first run on the obstacle course.
Then, he won the event by outracing Robert Hays in the Finals.﻿

Apparently, right after the cancellation of the show in Summer 1981, Bear went on a bit of a wild tear down in South America. He spent a lot of time in Brazil. He was a guest of honor at Carnival. One source says that in mid-'82 he was one of the first recipients of a "Brazilian Wax." If so, one would think there would be pictures of this somewhere. I've found nothing. Bear could have bagged that hair and sold it at Classic TV conventions. (Interesting side note: All chimpanzees speak Portuguese.)

In 1983, he's back in the U.S. auditioning for a brand new show that seemed right up his alley.  Documents from the Network show that he was first in line to star in the sitcom Mr.Smith. It was a sitcom about a chimp who becomes President of the United States. For some reason, at the last moment, the network decided to go with an orangutan instead. Bear was heartbroken. Not least because the star of that sitcom achieved something Bear never did...  he appeared on the cover of CRACKED Mazagine. 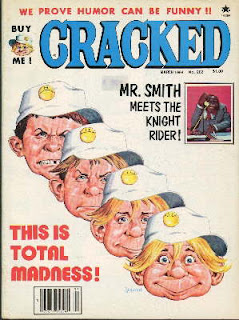 Auditions didn't go well from there. Bear had plenty of money from his time in the limelight so that wasn't an issue. It was the constant rejection that was wearing this once-vibrant simian down. The Japanese occasionally called him up to do some commercials, mainly for bananas or beer or the new Tokashito Banana Beer. The straw that broke the chimp's back in this post-starlit world can be summed up in two words: Going. Bananas. A brand-new Saturday morning live-action show featuring a simian star that Bear lobbied for. He had B.J. write a letter of recommendation. Fred Silverman sent the production crew a series of flower arrangements and nut rolls. But...  I'll be damned...  at the last minute, the network decided to go with an orangutan. 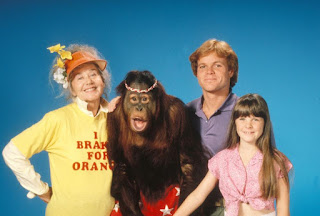 I am less than bananas over this﻿

This was the last straw for Bear. He moved to Europe. "Bumming Around" was the way his friends described his life at that time. Letting his hair grow long, hitchhiking through the Bavarian Alps, getting debauched. Or as debauched as a chimp can get, which is pretty debauched. In 1986, he fell in with German director Wim Wenders and his gang. Bear and Wim worked together on Wenders's film, Wings of Desire. Bear co-wrote the screenplay, under the pen name Richard Reitinger. Bear was actually the person that got Peter Falk (they'd been friends for years) involved with the movie. Although they were broken-hearted when it didn't get nominated for an Academy Award, the film was well-loved and did win awards in Europe. This adventure in writing re-kindled a passion of Bear's that he had forgotten. 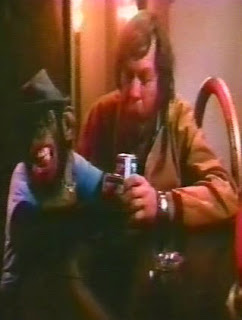 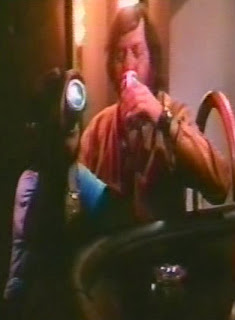 Hanging with Wim in Berlin﻿

Before I go any further, let me say that Bear had exhibited strong writing talents back on B.J. and the Bear. As the show went along and Bear got more clout, he began to insist upon writing episodes of the show. Under the pen name "Tom Sawyer," he wrote four episodes of the third season. According to old interviews, it was Audrey Landers (who appeared as Cain's daughter in two episodes) that convinced him to write. Her and Bear had been a "couple" for around a year. Apparently, she helped him write and he helped her get her music career going. (We'll have to wait for an autobiography from Audrey to get the full scoop.)

In a brief email interview I had with B.J., he told me that Bear's scripts were always well-written, charming, action-packed and filled with beautiful ladies. Because Bear wrote by hand, the scripts were generally 200 to 210 pages longer than an average script. But, you got used to it. McKay told me the only problem on set during the final season of the show's run was the addition of Judy Landers as Stacks. Bear had recently broken up with Audrey and now found himself in love with Judy. Apparently, there was much tension when the two of them started dating. (Judy's autobiography will clear everything up.) Regardless of all the tension in 1980, by 1985, Bear was setting the Sisters up with their own SOV action film in Germany called Deadly Trigger (aka Deadly Twins) and all seemed to be right in their world. 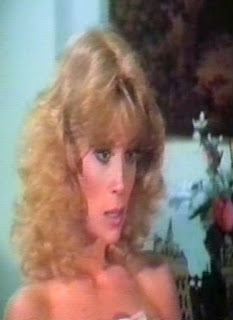 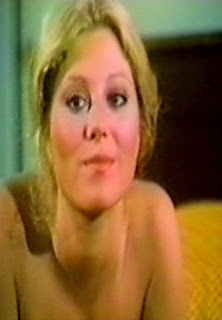 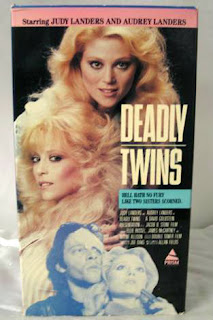 Anyway...  sorry for the gossipy sideline... When Bear returned to the U.S. in the early 1990s, he was able to get a job as a Script Doctor through his connections. He was good friends with Alan Spencer and John Sayles, both of whom are considered two of the best Script Doctors in the industry. His first job was a final revision to the Clint Eastwood feature The Unforgiven. Even though Bear's name is nowhere on there, Eastwood readily admits that it was Bear who pulled that script together at the last moment. 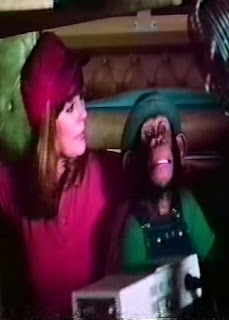 Well, for the next 20 years, Bear spent his time doing this unsung work and becoming one of the best in his field. His biggest collaborator was Michael Bay. When Bear passed, in 2011, Bay said "There was no one alive who could bring together a Transformers script as cohesively as my best friend Bear." Bear ended up having a nice home up in the Hollywood Hills. He never settled down with one woman but there was a never-ending flow of starlets going up to his place for late night "parties." Even though one hears rumors of Hollywood weirdness, Bear was never really considered "weird". He was a completely normal script doctoring superstar chimpanzee that liked to dress in overalls. 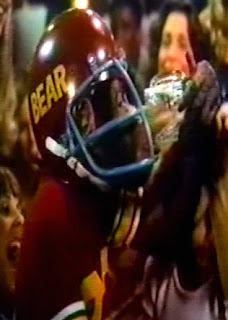 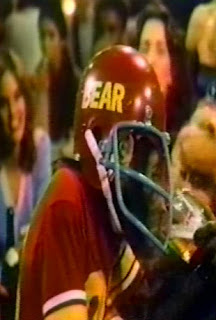 It's from BJ and the Bear, however,  that most folks know him best. Playing sidekick to the great B.J. McKay. McKay, himself, is retired. He lives in Wisconsin, keeping away from the limelight as much as possible. He occasionally visits conventions to sign autographs and mingle with fans. Sometimes he'll bring the rig to a show or take it mud bogging. But, mostly, he goes fishing and writes Riptide/ Game of Thrones fan fiction. Above his mantelpiece in his downstairs living room, hangs a giant autographed photo of his best friend Bear. Nothing speaks to their friendship more than that. 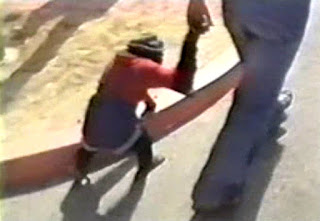 * For some reason, screenshots taken from B.J. and the Bear episodes always wind up stretched out. My apologies.﻿
﻿
Posted by Daniel B? at 6:00 AM