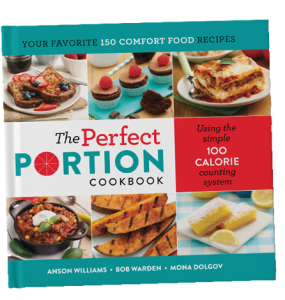 Did you read the title of this post? Yes... Warren "Potsie" Weber, AKA Anson Williams, wrote a cookbook. I'm in. Sign me up. 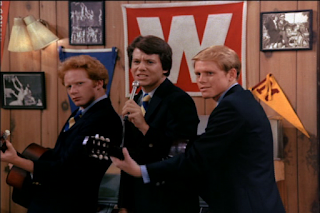 Potsie In The Middle

Anyone who knows my writing knows that I'm a big Happy Days fan. A couple of years ago, I wrote an article for Popmatters entitled "Jumping the Shark and Surviving." It was a (very) detailed history of the show explaining why The Fonz jumping the shark was NOT the creative end of the show. Christmas 2015 - I wrote a 2-part article connecting two of my favorite Christmas episodes. I plan on getting in-depth, episode by episode, into the Post-Richie seasons soon. (More obscure shows have taken precedence for the moment.) Plus, back in early 2014, when the Hallmark Channel was airing the show from 2PM-5PM, Monday through Friday, I watched the entire run of the thing. (About 250 episodes.) So, yes, I'm a fan.

As a fan, I always keep an eye out for Happy Days-related stuff. (Mainly, now, for the rest of the series to hit DVD.) Yes, I have the Fonz for President album. Yes, I have several of the spin-off novels. Yes, I have every issue of CRACKED Magazine with a character from the show on the cover. There are also ancillary items out there that involve people related to the show but are not about the show itself. (I can get out of hand with these. When I was big into Garfield, I bought a cat care book featuring The Big G. Even though I wouldn't have a cat for 15 years.) Last week, I found out about a very cool book... 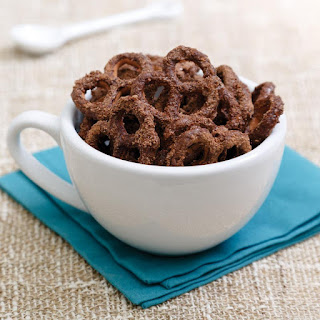 Yes, I will have 100 calories worth of that.
Thanks for asking.


What?! Everyone's favorite singing hunk from the suburbs of Milwaukee wrote a cookbook! Answer: He did. I had known Anson Williams has been directing for decades. But, I didn't know about this passion. So, what else can a Happy Days fan do? I obtained a copy of the book and sat down with it. 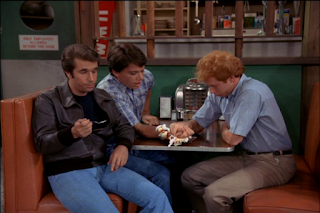 Notice: The Fonz is eating the sundae.
Potsie has, very cleverly, stopped The Fonz at 100 calories
by "losing" an arm wrestling match to Ralph Malph
(And this was the late 1950s!)

I have been working on losing a few pounds as of late. I'm getting older. My metabolism is slowing. And, frankly, I love a good meal. So, the premise behind this cookbook seemed right up my alley: A series of "comfort food" recipes proportioned off into 100 calorie chunks. One could enjoy really yummy food in manageable portions. I kept my fingers crossed...  and tried a few of the meals.

Chicken Piccata - The picture looks very promising. The meal was prepared...  and it was fantastic. Very, very tasty meal. It did take a large chunk of my willpower to eat exactly the portion I was supposed to eat. But, I kept thinking WWPWD? And I knew that I should stop when I was supposed to. (I also drank a big glass of water afterwards. That fooled my stomach.)

Enchilada Bake - Again, delicious dish. I make a very yummy enchilada meal myself and this compared very favorably with what I whip up. And again, the only issue: my rusty willpower.

Scalloped Potatoes - I really liked this one as this was the only potato meal I could stomach as a child. Plus, they don't go au gratin on you. This is proper scalloped potatoes without cheese. Very good stuff.

Egg White and Broccoli Frittata - This was my absolute favorite meal (so far). I would make it every day for breakfast if I had the time.

At the moment, those are the four recipes that I have made from the book. 4 for 4. I can't wait to whip up some more. My enthusiasm to dive in further is greatly assisted by the fact that the book itself is really beautifully laid out. Here are some scans of food photos from the book: 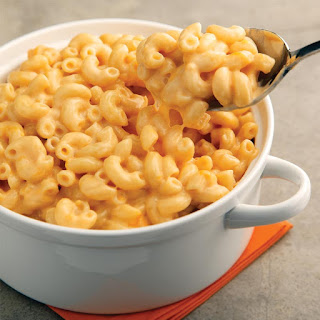 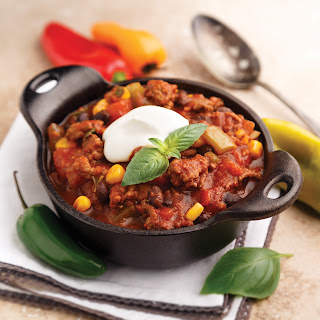 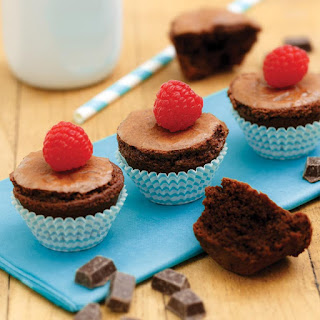 It's a very attractive book. On its best pages, it's more than a functional cookbook. It's almost an art book. I like that. A lot. The actual recipe pages are nice to look at as well. Here are a few scans: 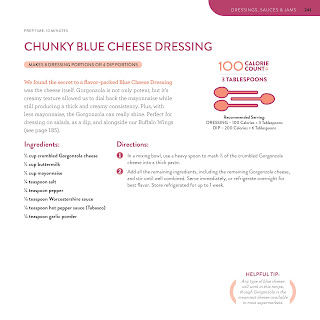 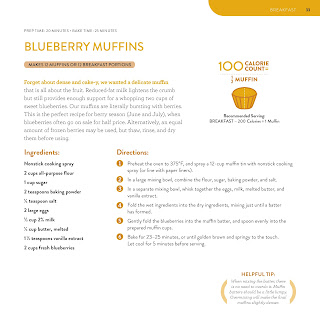 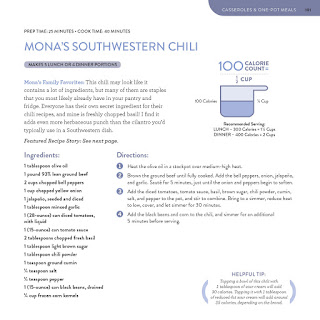 I recommend this book very highly. Beautiful design, delicious recipes and the promise of calming your diet down to keep you fit and trim. Plus, it's Potsie, for Heaven's Sake! 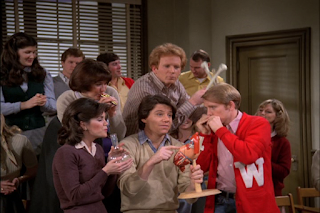 The only disappointment: No introduction from Donny Most. You can't have it all. 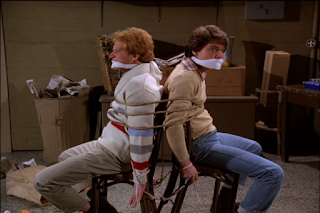 *Although, no one here recommends gagging yourself and then tying yourself to a chair to cut down on calories. (I don't care how funny Ralph is.)